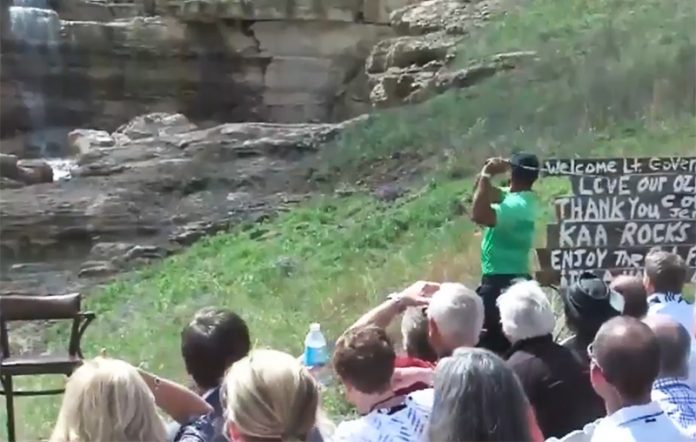 In case you missed it, Tiger Woods announced plans for a new course at Big Cedar Lodge. But what really excited me was seeing Tiger swing a club again.

After struggling with back problems over the past couple years, Tiger was forced to take more time off from the Tour to allow his back to fully heal. And it seems to be helping a little bit… I think.

During the press conference, as part of pre-tournament promotions for the Bass Pro Shops Legends, Tiger was challenged to a friendly competition on the range by a 10-year-old.

.@TigerWoods took a few swings during his course announcement at @BassProLegends. pic.twitter.com/loFG3p7WeS

Tiger’s first shot drew moans and groans from the crowd as his ball fell short, and into the rocks. However, Tiger’s second shot seemed to find the green.

Although, it was good to see Tiger swinging a golf club once again, it was also depressing that he joked about being on the Champions Tour in nine years – “it is coming quick,” he said.

Tiger seemed to be in good spirits and was also joking with the media.

Tiger Woods bringing the jokes today: "I grew up on a Par-3 course. It was lit at night — just like most of the people were."

Here’s to hoping we see Tiger back on tour soon!