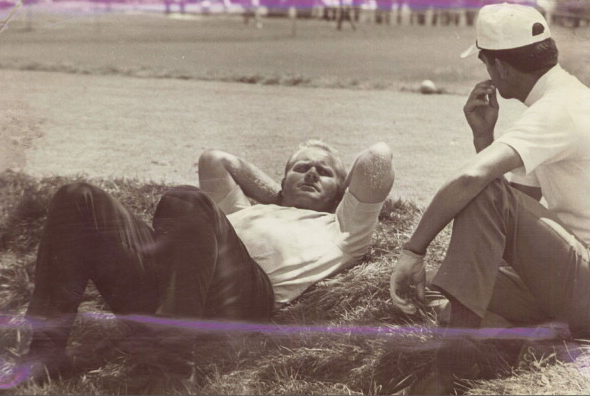 Known as “Glory’s Last Shot,” the PGA Championship will tee off at Quail Hollow Club in Charlotte (NC), and will present the final chance for a player to join Sergio Garica, Brooks Koepka, and Jordan Spieth as a major winner this season.

Before we get there, here are 10 interesting facts and figures to know about the PGA Championship.

The winner of the PGA Championship today receives a replica of the Wanamaker Trophy. The trophy is named in the honor of Rodman Wanamaker, who is credited with revolutionizing the department store concept in America.

A golf enthusiast, Wanamaker was a driving force behind the creation of the PGA of America and had put up the money to hold the first PGA Championship. The massive trophy weighs an incredible 27 pounds.

The first PGA Championship was played in 1916 and was was a Match Play format up until 1957. The PGA of America decided to alter the format to a Stroke Play format to ensure more big names were in the mix on Sundays to satisfy the demands of its new TV broadcast partners, rather than just two players fighting it out in the final.

3. WHEN THE TROPHY WAS LOST

The winner of the Wanamaker Trophy keeps the trophy for a year before returning it the next year, to be presented to the winner. Walter Hagen won four back-to-back PGA Championship from 1924-27. In 1926, on being asked why he didn’t bring the trophy to the awards presentation, he replied that he had no intention of losing it to anyone.

But in 1928, Leo Diegel beat Hagen in the quarter finals before going on to win the finals. When asked for the trophy, Hagen finally owned up that he’d lost it. Apparently, the previous year in Dallas, Hagen had handed over $5 and the trophy to a cab driver, asking for it be delivered to his hotel. The trophy never arrived.

In 1930, the trophy was finally found in Detroit, in the basement of L.A. Young & Company, the firm that manufactured the Walter Hagen line of clubs. Meanwhile, the PGA of America had a replica built which is what is presented today. The original trophy, the one Hagen lost, now resides in the PGA Historical Center in Port St. Lucie, Fla.

Over the years, the Champions Dinner at The Masters has been well covered by the media. Most people don’t even know that there is a similar tradition at the PGA Championship. Defending champion Jimmy Walker, of Texas, is putting together a steakhouse theme.

“It’s my menu, yeah. We’re doing a really good meat and cheese and olive plate, and then lump crab and shrimp cocktail, and then a steak, a really nice steak,” said Walker after the second round of the WGC-Bridgestone Invitational. “Real steakhouse theme. French fries. Really good spicy mac-and-cheese, Caesar salad and I think there’s another salad if you don’t want that. I don’t know. It was my menu but they added a lot of stuff.”

The defending Champion is also responsible for passing out gifts to all former champions in attendance.

The PGA Championship has been played all over the country, but is primarily played in the Eastern United States with the state of New York having hosted the most championships. Southern Hills Country Club in Tulsa, Oklahoma, has held the PGA Championships four times, the most of any of the courses.

This year will mark the third time it’s been played in the state of North Carolina (1936 Pinehurst, 1974 Tanglewood Park). The 100th PGA Championship will be held in 2018 at the Bellerive Country Club outside of St. Louis, Missouri.

Y.E Yang won the 2009 PGA Championship at the Hazeltine National Golf Club in dramatic fashion, edging past Tiger Woods in the final round. Starting the day two-strokes behind Woods, the South Korean Yang shot a 2-under 70 to win by three strokes. He became the first Asian-born player to win a men’s major championship, and still remains so.

Hideki Matsuyama could become the second Asian to win a PGA, and the first from Japan.

7. NICKLAUS’ LOVE FOR THE PGA CHAMPIONSHIP

Not only has Jack Nicklaus won the PGA Championship five times, he has many other records at the championship.

Ten of the previous 12 winners of the PGA Championship had already won a tournament earlier in the year.

9. THE THREE BEST TO NEVER WIN THE PGA

The list of winners of this major is quite extensive. But there are three golfers who stand out as never having won the PGA Championship: Arnold Palmer, Tom Watson, and Seve Ballesteros.

Both Palmer and Watson were a PGA Championship title short from completing the career Grand Slam.

Palmer has 62 wins in his career but the PGA Championship is not one of them. Palmer finished second three times, in ’64, ’68 and ’70.

Winner of 39 titles in his career, Watson is another great who never won the PGA Championship. Watson lost in the Playoff in 1978, and finished in the Top-10, nine other times.

With 91 professional wins, Seve is often regarded as the greatest Continental European golfer of all time. He never got to win the US Open or the PGA Championship. His best finish at this championship came in 1984 when he finished in the fifth position.

The PGA Championship Long Drive Competition was first held in 1952 at the Big Spring Country Club in Louisville. It was discontinued from 1965-73 before returning in 1974. It was again discontinued in 1984 and was revived three years ago at Valhalla where Louis Oosthuzien won with a drive measuring 340 yards.

The 592-yard, par-5 10th hole at Quail Hollow will be the site of this year’s PGA Championship Long Drive Competition, taking place during Tuesday’s practice round.

This post originally appeared in 2016, but was updated to reflect a preview of the 2017 PGA Championship at Quail Hollow.