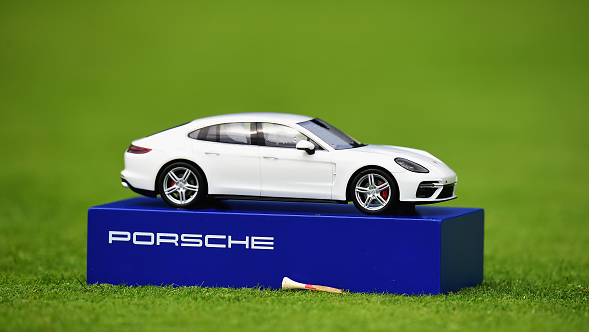 In lieu of the PGA Tour going north of the border, for the RBC Canadian Open, and unveiling some awesome goalie mask tee markers, I thought it would be neat to rank the top five markers to ever grace the pro tours.

This has to be one of the best tee box markers ever! @RBCCanadianOpen @GlenAbbeyGC pic.twitter.com/k7bYU6BMnx

Starting at five, we have one of the longest running events on Tour in the John Deer Classic. TPC Deere Run has featured some of most interesting markers on tour year after year, including model sized tractors, excavators, and combines.

Coming in at No. 4, we have the 6-pack of Coke tee markers used at the Tour Championship as recently as 2015 (in 2016 they switched to wooden boxes with Coke logo). The only thing that would make these puppies better would be if they were real Coke bottle the players could drink, maybe Diet Coke bottles in John Daly’s case.

At three, we have the model-sized Porsche cars used at the 2016 European Open. Along with the multiple different vehicles used as tee markers, the tournament also offered up the opportunity to win an actual Porsche with a hole-in-one on the 17th.

I’m going (real) old school at No. 2 with the stagecoaches used at the Wells Fargo Championship in Wilmington, North Carolina. These tee markers take us back to a much simpler time, one where players can see green as far as the eye can see.

Finally, at one, I decided to go with a unique and representative tee marker in the Gazebo replicas used at the Greenbrier Classic. Integrated in the tournaments logo, the Gazebo is an integral part of the course and a must-see if ever at the event.