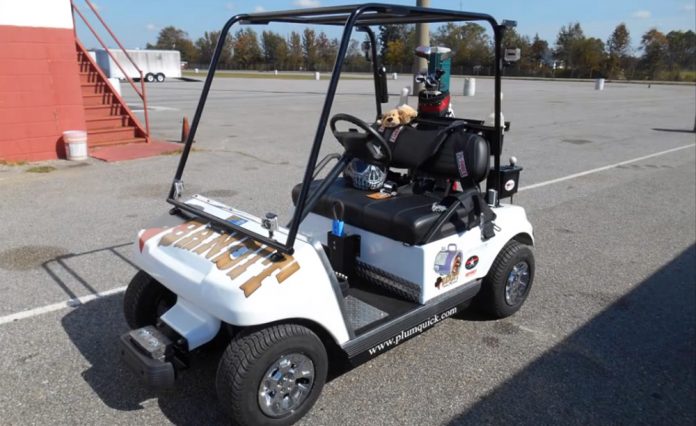 We all know that Henrik Stenson shattered multiple records at the British Open this year. Professional golfers seem to do it every week. But there are numerous other golf records that have nothing to do with the PGA Tour – with most of them related to crazy and off-the-wall feats by golf fanatics.

Here are 11 such golf records you may find interesting (or wacky). All records mentioned below are recognized by the Guinness World Records.

The longest golf course in the world is the Jade Dragon Snow Mountain Golf Club in Lijiang, China. It plays as a Par-72 at 8,548 yards.

Satsuki Golf Club in Sano, Japan, boasts the longest hole in the world, a Par-7 at 964 yards.

Back in 2006, during a spacewalk outside the International Space Station, Russian Flight Engineer Mikhail Tyurin assisted by Commander Michael Lopez-Algeria, teed-off using a gold-plated 6-iron. This stunt was a commercial agreement between a Canadian company called Element 21 and the Russian Federal Space Agency. NASA estimates that the ball would have orbited for three days before burning up in the atmosphere, travelling a distance of 1.26 million miles.

4. Youngest Player to Hit a Hole-in-One

At the age of just 4 years and 195 days, Christian Carpenter hit a hole-in-one at the Mountain View Golf Club, Hickory, North Carolina to become the youngest male golfer to do so. Soona Lee-Tolley is the youngest female golfer to do hit a hole-in-one. She did it at the age of 5 years and 103 days. She achieved it at the Manhattan Woods Golf Club, West Nyack, New York.

5. Most Hole-in-Ones is a Single Round

The fastest cart is called the “Bandit”, and is owned by Plum Quick Motors. Back in 2014, it achieved a speed of 118.76 mph when driven by Robby Steen at the Darlington Dragway in Hartsville, South Carolina.

7. Fastest round By a Foursome

At Ponteland Golf Course in Northumberland, UK, the foursome of Ben Crosby, Andrew Crawford, John Lyon, and Russell Hayhoe played 18 holes in 1 hour, 4 minutes, 25 seconds on June 19, 2005. If we all played even half as fast, this game would be that much more popular.

8. Fastest Time to Play a Round on Each of the Six Continents

South African Heinrich du Preez took 119 hours and 48 minutes to play 18-hole rounds in all six continents. His itinerary was something like this, South Africa – Germany – Argentina – USA – Australia – Thailand. Apparently he has 14 other golf centric Guinness World Records to his name.

9. Most Courses Played in One Year

Canadian couple Cathie and Jonathan Weaver played 449 different golf courses across Canada and the United States from April 2008 to March 2009. The Weavers set out in their RV to raise money for the Ronald McDonald House – a charity which aims to improve the health and well-being of children.

10. Fastest Hole by a Foursome

At the Open de Espana earlier this year, three teams attempted to break the Guinness World Record for the fastest hole in golf. The attempt took place at the Par-5 fourth hole at the Valderrama Golf Club. It took 34.8 seconds for the French Team, consisting of Raphael Jacquelin, Alex Levy, Romain Wattel, and Gregory Havret, to break the old record of 68 seconds.

11. Most Rounds Played in Different Countries in 24 hours

In June 2013, Belgians Kasper De Wulf and Alexander Hautekiet played eight round in eight different countries. Playing in the Stroke Play format they began in Italy and their journey took them to Slovenia, Austria, Germany, France, Luxembourg and the Netherlands, before completing in Belgium.