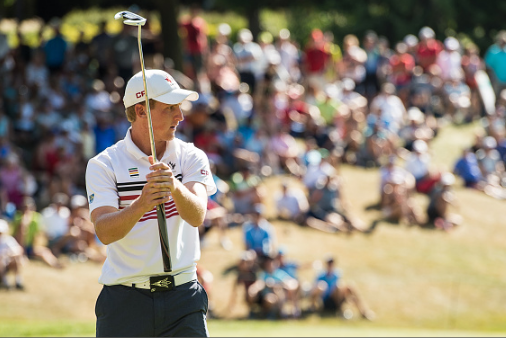 On a dry day in Canada where 350-yard drives were a more common sight than beavers, the par-5 18th hole was the difference, as eagles from Brandt Snedeker and Canadian amateur sensation Jared du Toit vaulted them to the top two places on the leaderboard at the RBC Canadian Open.

With a round of six-under 66, Snedeker is at -9 for the tournament, one stroke ahead of du Toit and world #2 Dustin Johnson.

The crowd will be heavily behind the 21-year old Calgary native du Toit, as the Arizona State star, playing in his first PGA tournament, is attempting to become the first Canadian to win the national open in 62 years. With a win, he would also become the first amateur to win a tour event since Phil Mickelson, also of Arizona State fame, did it in 1991.

Snedeker, the winner of the Farmers Insurance Open back in January, rode two hot stretches of golf to the top of the leaderboard. He birded holes 2, 3, 4, 5, and 6 to go out in 5-under 30. Then on the back nine he finished birdie-par-eagle. He scored low mainly through great putting and being second in the field in birdies.

Snedeker joked after the round that he is “half-Canadian” since his caddie is from Ontario, but he knows the crowd will be cheering mostly for du Toit, his playing partner tomorrow.

For the second straight day, American Steve Wheatcroft was on the end of the scoring spectrum. Yesterday, Wheatcroft tumbled down the leaderboard with a round of 5-over 77. Today, he was dialed in. A birdie-birdie-eagle finish aided him to a tournament low round of eight-under 64. He is at -7 for the tournament. Wheatcroft was fantastic on approaches today, hitting 78% of his greens in regulation. He is in good form, going T5, T20 in his last two events. He has never had a season where he made at least $1,000,000, nor has he finished in the top 100 of the FedEx Cup standings. A win here, would take care of both of those.

Derek Fathauer also played himself into contention with a bogey-free round of seven-under 65. He is at -5 for the tournament.

Long-hitting American Luke List co-lead after 18 and 36 holes, but a dreadful back nine effectively took him out of contention. He double-bogeyed 12 and 17, and tripled (aided by a penalty for the ball moving before his putt) the par-4 14. List finished with a round of five-over 77.

Jon Rahm had a mildly disappointing round with an even-par 72. Another Arizona State product, Rahm was one-shot out of the lead after both the first and second rounds. After 54 holes, he finds himself three back, and will definitely need to play better tomorrow if he wants to win.

“I got to feel what it was like to be Dustin Johnson for a hole. It was pretty nice.”
– Brandt Snedeker talking about his eagle on the par-5 18, where he got to hit his second shot in with a lob wedge.

“I have no idea, Ive never been here obviously, but I’m looking forward to it. I haven’t had this kind of pressure or been in the atmosphere before. I’m just trying to have fun.”
– Jared du Toit on how he will be able to stay patient tomorrow.