In this post we’ll keep track of the 2018 Rapiscan Classic for the first two rounds of play in a quick-hit format (who leads, who’s in hunt, quotes, and stats). Following Sunday’s final round at Fallen Oak GC, we’ll produce a full recap with story, quotes, final stats and how the tournament played out, round by round.

Steve Stricker posted a second-round 3-under 69 and will take a one-shot lead into Sunday’s final round of the Rapiscan Systems Classic.

Starting the day two off the lead, Stricker offset a pair of early bogeys with two birdies to turn at even-par 34. A back nine of seven pars, one birdie and an eagle 3 had Stricker signing for a two day scorecard of 7-under par.

In all three of his starts this season, Stricker has been in Sunday’s final group. At the Chubb Classic, he was second and went on to finish T2, and at the Cologuard Classic he was T2 and he went on to win.

Sluman carded the day’s best round, a 5-under 67, and improved from T12 to T2. This is his best position entering the final round since he was T2 through two rounds at the 2013 Encompass Championship.

Overnight leader Joe Durant was 3-over through six holes Saturday, but he rebounded with three birdies en route to an even-par 72. He will play in Sunday’s final pairing with Stricker for the second time this season.

Steve Stricker (68, 69 -7)
“You know, it’s always a challenge to win anywhere. I’m glad I was able to win a couple weeks ago at Tucson at the Cologuard Classic. That helped me a little bit I think this week. I don’t feel as much pressure, but still feel the pressure to try to win. I mean, so it will be a challenge tomorrow for everybody who’s up around the lead. I think we’re going to get a little breezy day again tomorrow and the greens are still fast and it will be a challenge.”

Joe Durant (66, 72 -6)
“I’m just going to have to play really well. Steve’s swinging great, he’s hitting a lot of good shots. He played a super round today, really solid. He’s not going to go anywhere, so it’s going to take — and Jeff obviously played a really good round, 5 under today was super. So there’s good scores out there, let’s hope maybe one will be mine tomorrow.”

Jeff Sluman (71, 67, -6)
“Well, yesterday and today was very, very difficult. I think our officials did a great job of setting the golf course up. We had a few tees up on really long holes that were into the wind. There’s no secret out there, you’ve got to hit the ball very solidly in the wind, doesn’t matter where you are, and I was able to do that and just kept the ball in decent positions that we always joked on the range, the Triple D you don’t want, downwind, downhill, down grain where you can’t even stop the ball. So I was able to really avoid situations like that for the most part today.”

RAPISCAN CLASSIC ROUND ONE

Joe Durant carded a bogey-free 6-under 66 which included three birdies on both the front and back to record his lowest opening-round score for the year. Durant also shot a 66 in the opening round of the 2017 Rapiscan Systems Classic. 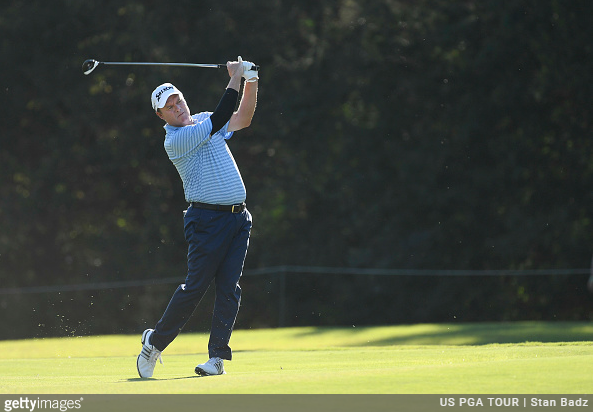 Durant leads by one over Mark Calcavecchia, who closed with five birdies on the back nine to post a 5-under-par 67 – his lowest score recorded in six starts at this event.

One further back at 4-under 68 was Steve Stricker, who offset two bogeys with six birdies.

Joe Durant (66, -6)
“I do, it just sets up nice to my eye. It’s a beautiful golf course and it’s very challenging. The tee shots seem to set up well for me, but the greens are maybe as quick as I’ve ever seen them here. You really have to put the ball in the right spots. I played very nice today. With the wind swirling like it was, I’m really happy.”

Mark Calcavecchia (67, -5)
“I’m ecstatic. If you go back and look at my last seven years here, my very first year I had a top-10 and that’s been it. So it’s probably my best round I’ve ever had here and it was a tough day to play. The greens are just, I’m sure you’ve heard it from some of the other guys, lightning fast. They’re pretty slopey greens, so very difficult to putt. And I didn’t start off putting too well the first five or six holes but after that I putted great and I hit it pretty good so it was certainly a great start.”

Steve Stricker (68, -4)
“You know, just getting it around and managing my game I think like I always do. You get in the wrong position here with the greens being so fast and you’re going to be in trouble. I did that a couple times today. 17 was not a very good shot, but overall I gave myself a lot of opportunities, hit a lot of greens in regulation and snuck a few putts in there at times.”