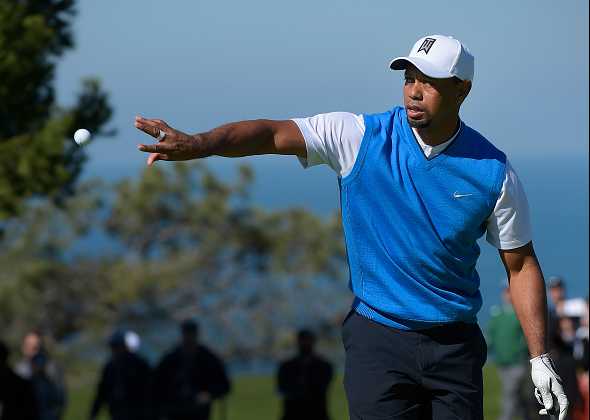 The Olympic gold medalist, Justin Rose, has the solo lead after Round 1 of the Farmers Insurance Open. The Englishman’s round was highlighted by two eagles, while en route to a 65 on the North Course.

Adam “Mr.59” Hadwin continued his solid play by firing an opening round 66 on the South Course.

Gary Woodland, Brad Fritsch, Charles Howell, Beau Hossler and Trey Mullinax all find themselves 2 shots back after opening up with 67s.

To close out coverage of the opening round, here are the 3 best shots.

Justin Rose had a great round that could have been even greater if he would’ve eliminated the mistakes. Rose made 3 bogeys on the day, but those were quickly made up by his 6 birdies and 2 eagles.

Rose, playing the North Course, had quite the finish down the stretch – finishing eagle-birdie-birdie-bogey-eagle.

Justin Rose finished his round with a bang ?#ShotOfTheDay pic.twitter.com/CA6KlJAuDr

Not many players on the PGA Tour have the creative mind that Mickelson possesses. I’m also not sure what shot is better so it’s a good thing PGA Tour Twitter account put them both in one video.

The first shot is a lag putt that Mickelson decides to take a different route, rather than straight at the hole. Mickelson went on to convert the two putt for a birdie at the 5th, his 14th hole.

Mickelson’s second shot in the clip is a flop shot from his 10th hole of the day. Mickelson went on to card an opening round 71, which currently sits T48.

Which shot was was more impressive? pic.twitter.com/y1CjQszLn1

Its exciting Tiger Woods is back in action and looked to be healthy. His last time playing at Torrey Pines did not go well, as he withdrew after his “glutes were not firing”.

However, Tiger showed some good things today, even though his swing looked late most of the day. Tiger bogeyed his opening hole but then scrambled for par the rest of the front nine.

Tiger’s tee shot on the 10th found the rough but after an excellent approach shot, he went on to make his first birdie in an official PGA Tour event in 523 days!

Tiger's got his first birdie of 2017.#QuickHits pic.twitter.com/6USeDNCAiG