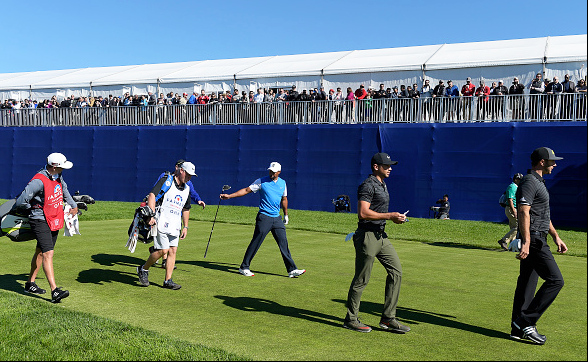 Justin Rose fired a 7-under par in the opening round of the Farmers Insurance Open at Torrey Pines North. The reigning Olympic gold medalist leads Canada’s Adam Hadwin (-6) by a single stroke. A group of five players are tied for the 3rd spot at 5-under.

Here are 5 quick thoughts about the opening round at the Farmers.

The aggregate score of Tiger Woods from holes 12-17 yesterday was 6-over-par! Woods went bogey-bogey-bogey-double bogey-par-bogey during this stretch of six. Over the other 12 holes, Tiger was 2-under par.

Adam Hadwin, the relatively unknown 30-year-old from Canada, seems to have found a groove this season. Following a cut at the Safeway Open in October, the 110th ranked player in the world has finishes of T21 (CIMB), T27 (Shriners), T10 (OHL), and solo 2nd (CareerBuilder) – which included a 59. After the first round at Torrey Pines, Hadwin is all alone in second.

Pat Perez, the social media star, is once again near the top of the leaderboard at T8. The Arizona State alum continues to play solid golf in the new season: T33, T7, Win, T3, T69. He is currently ranked 3rd in the FedEx Cup standings.

5. The South Will Rise (Your Score)

In case you’re wondering, the South Course plays much harder than the its sister course, the North. Of the 40 worst scores in the opening round, 33 were played on the South track. In fact the 19 worst scores all came down South.