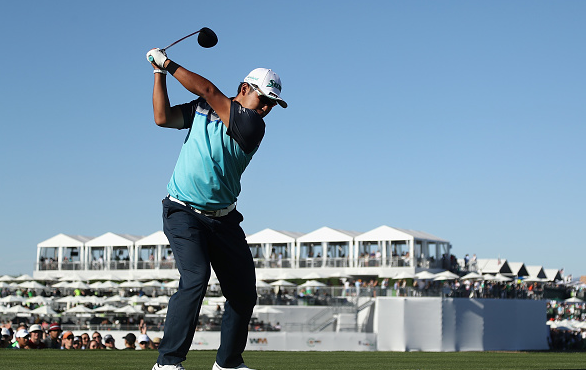 Byeong Hun An (-16) is looking to become the fifth first time winner this year, as he leads by 1 after a third round 65. Martin Laird also fired a 65 and sits alone in second, one behind the leader, An.

Rounding out the top 5 are John Peterson, Hideki Matsuyama, Graham DeLaet and Michael Kim who are all tied for 3rd at 12-under-par – just 4 shots back.

To wrap up Round 3, here are the best shots of the day.

The defending champion kept himself within striking distance of the lead after a 3rd round 68. Shots like this near-ace at the 16th sure helped his cause too.

Matsuyama hit it to a couple of inches and was by far the closest to the hole of the day. The fans appreciated the shot more than he did – but here’s to hoping we see an ace today and watch the madness unfold in the stands.

Have A Day John Peterson

John Peterson had the round of the day after an 8-under 63 that included a double-bogey. After Peterson’s solid play on Saturday, he shot up the leaderboard into a share of 3rd at 12-under.

Although Peterson made a double-bogey, this eagle at the par-5 13th sure helped his cause to go low.

Round of the day? @JohnPetersonPGA's 63

Mickelson’s drive at the 9th went sailing left and ended on a path in the trees. Mickelson then hit one of the better escape shots down the path and just over the back of the green. Mickelson walked away with a bogey but ended up carding a 6-under 65.