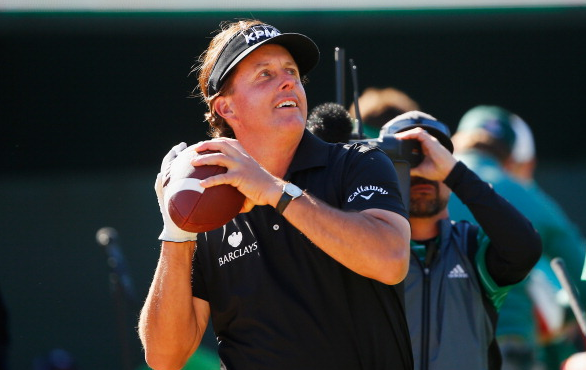 Following an impressive round of 5-under 65 on Saturday, which included one of his prototypical escape shots, Mickelson did his obligatory media meet.

After a few questions about his lights-out round, the five-time major champion, and three-time winner of the Phoenix Open, was asked who he liked in the Super Bowl.

Mickelson admitted a “bias” due to a “relationship” he has with Tom Brady, but said he’s “pulling for the Patriots.”

The Arizona State alum, who does know his football, and was once a proficient gambler, said that both (New England and Atlanta) defenses are “impressive” and “underrated” and that it should be a “very tight” game.

Media: Can I get a Super Bowl pick from you? You know your football. Who’s going to win this thing tomorrow?

Mickelson: Well, I’m a little biased. I’m pulling for the Patriots because of a relationship I have with Tom Brady and how much I really like him. I find myself pulling for him. I don’t know if I have an unbiased opinion.

I do think both defenses are really impressive and probably underrated. I think it’s going to be a very tight, fun game to watch.