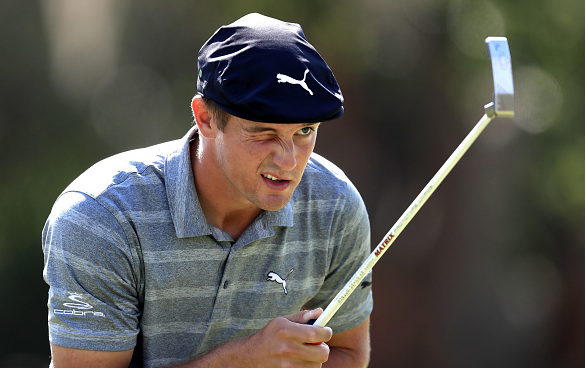 Adam Hadwin shot a second round 7-under 64 and leads the Vaslpar Championship through 36 holes. First round leader Jim Herman played to even-par but finds himself only one shot back and will play with Hadwin in the final pairing on Saturday.

Here are six thoughts after two rounds of play at Copperhead.

1. Adam Hadwin, the 36 hole leader, is officially legit. Hadwin, who fired a 59 at the Careerbuilder Challenge, should no longer be considered a flash in the pan. The Canadian has made the cut in his last 9 starts.

3. Bubba Watson has fallen and can’t get up. Last year at this time Watson was the 4th ranked golfer in the world. Today you wouldn’t take him as the C player in a scramble at your company outing. Watson has done this for the season: T54, T25, CUT, W/D, T38, CUT. He’s currently 149th in the FedEx Cup and on Sunday night will be outside the top-150. Wow!

4. Graeme McDowell had the best comeback yesterday. After a first round 4-over 75, McDowell’s chances of playing the weekend looked slim. But a second round 4-under 67 allowed the Irishman to sneak into the weekend, right on the cut line at even-par.

5. Daniel Berger is another young star that is hard to figure out. Berger seems to be either really good or real crappy. His repertoire does not include consistency. In his last 5 starts, Boog has a T7 and T16 to go along with three MCs. Like his buddy Thomas, that’s a missed-cut clip of 60%. Which is garbage!

6. Bryson DeChambeau made a cut and will be on TV this weekend in an actual golf tournament, and not just pitching products at the commercial breaks. The former all-world amateur has had a horrendous start to his rookie season: MC, T36, T66, MC, T49, MC, MC, MC, WD, MC.