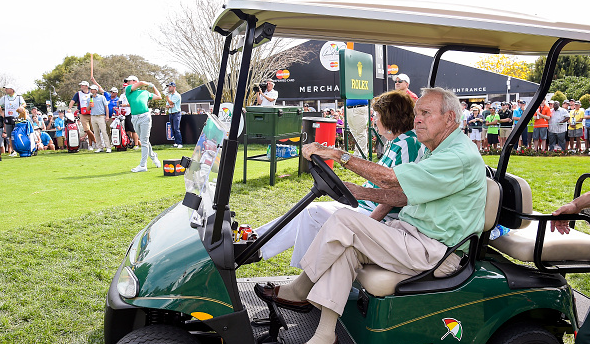 Earlier we posted a quick video where Rory McIlroy talked about the first time he ever met Arnold Palmer (on Augusta’s 13th hole in 2009).

Related to that post, here’s a letter written by Arnie in 2011 – posted by McIlroy this week, in remembrance of the King.

Just as a quick table-setter: In June of 2011, McIlroy won the U.S. Open in epic fashion at Congressional Country Club – finishing at 16-under, and lapping the field by 8-strokes. It was Rory’s very first major, and it essentially launched the Rory brand.

After his historic win, the then 22-year-old McIlroy received a congratulatory letter from the King himself.

Rory posted the letter to Instagram for all golf fans to read, noting, “A letter from Mr Arnold Palmer after my first major. Great words of wisdom as always. Can’t wait to play @apinv this week and celebrate his amazing life.”

The words written by Mr. Palmer, 81 at the time, show a man with pure class, and one who cared greatly about the image of the game.

At the close of the letter, Arnold asks Rory to keep the 2012 Arnold Palmer Invitational “in mind,” saying he’d “love to have” him at Bay Hill.

In case you’re wondering, Rory declined that particular invite from the King. In fact Rory actually never played in the Arnold Palmer until 2015 (followed up in 2016 and 2017).