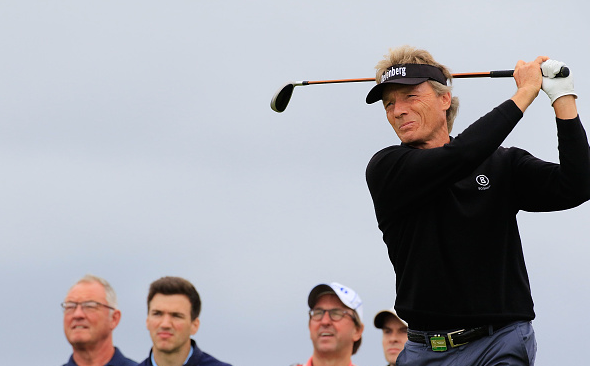 Bernhard Langer fired a bogey-free 6-under 65 in the third round of the Senior Open Championship and will take a four shot lead into Sunday’s final round at Royal Porthcawl.

Langer took advantage of the much calmer conditions on Saturday in Wales, making four early birdies, and then cruising to 2-under over the final nine to finish at 65.

Afterwards, Langer, who is at 5-under for the tournament, cited the better weather conditions for his improved performance.

“I knew the wind wasn’t as strong, and there may be an opportunity to go under par which was difficult to do the first couple of days,” said Langer. “The wind didn’t pick up – it was 5 to 10 miles per hour. I played very solid, and the result was a 6 under.”

In solo-second is American Corey Pavin, who also shot 6-under 65 to move from 5-over to 1-under.

“It was an easier day to play golf, no doubt about that,” said Pavin. “There’s a lot of good scores out there and, fortunately, things went well for me today. I’m in a good spot. I’ll go out there tomorrow and play the best I can and see where I end up.”

Aussie Peter Lonard is at even-par, and alone in third, following a bogey-free round of 67.

Two other Americans, Steve Flesch and Billy Mayfair, shot matching 71s and are tied for fourth with Spaniard Miguel Angel Jiménez (65) at 1-over.

A group of four golfers are tied for seventh at 2-over, and round out the top 10.

“I had more energy, and I certainly played a lot better. I hit a lot of fairways and a lot of greens. I gave myself lots of opportunities to for birdies, and didn’t really have to scramble for par too often, which was a very enjoyable round of golf.”
Bernhard Langer, Third Round Leader, The Senior Open