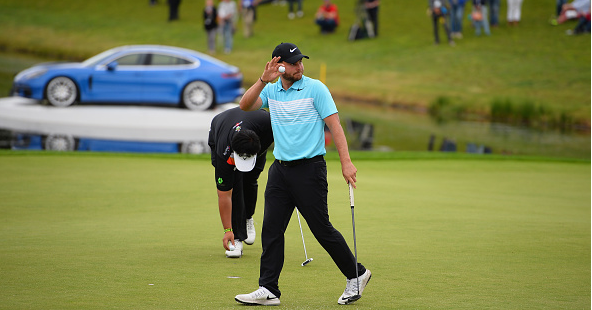 Englishman Jordan Smith shot a bogey-free 67 on Saturday at Green Eagle Golf Courses and will take a two shot lead into the final round of the Porsche European Open.

Smith’s round included five birdies – two of which came at the close of his opening-nine (holes 8 and 9), giving him a share of the lead at 10-under.

The 24-year old rookie then took sole possession of the lead, plus one extra for insurance, with birdies on the two closing par-5s (15 and 18) to finish at 12-under.

“Obviously its long and thankfully they’ve put the tees forward because it’s playing soft, so it’s just planning your route around the course and taking advantage of the par fives where you can.” said Smith, who has a world ranking of 125.

Defending champion Alex Levy (69) and Swede Jens Fahrbring (70) are tied for second at 10-under.

Ashley Chesters, the 36-hole leader, was cruising along at 3-under through eight holes, while holding onto the lead, but a tough bogey on the par-5 9th seemed to hurt the Englishman’s confidence. The 27-year-old went birdie-free over his final-nine, with two more bogeys, to post an even-par 72, and drop into a tie for fourth at 9-under.

First round co-leader Julian Suri (69) leads a group of five players tied with Chesters at 9-under.

Patrick Reed, who shot a 2-under 70, leads a group of six tied for 10th at 7-under. Jimmy Walker, who will be defending his PGA Championship title at Quail Hollow in two weeks, struggled to a 3-over 75 and dropped into a tie for 58th.

Germany’s own Marcel Siem holes out at the par 3 17th to win a Porsche!

“I’m over the moon, I played lovely from tee to green and putted really nicely today. I’m very excited. It’s been a while since I’ve been in the final group so I’m looking forward to it.”
–Jordan Smith, Third Round Leader, Porsche European Open