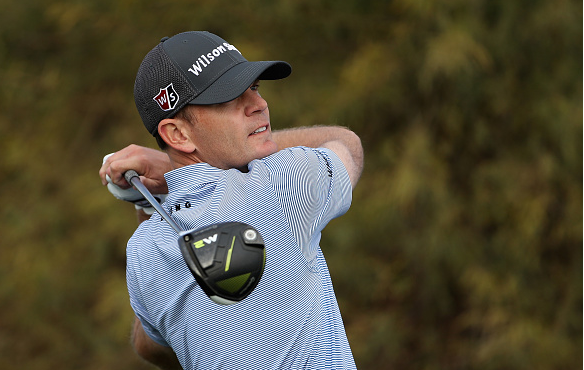 After 36 holes of play at TPC Scottsdale, Brendan Steele and Byeong-Hun An co-lead the Waste Management Phoenix Open at 10-under-par. Both Steele and An entered the second round near the top of the leaderboard, at T2 and T4, respectively – and both once again played a superb 18 holes of golf at the Stadium Course.

Steele, who already has a win under his belt at the season opening Safeway Open, fired a bogey-free 4-under 67, while An shot a second consecutive 66 with one bogey against 6 birdies.

First round leader Matt Kuchar cooled off a bit but still came in with a respectable 2-under 69 and is tied with Martin Laird, Sung Kang and defending champ Hideki Matsuyama for third at 9-under-par.

Matsuymama made a late run, and appeared ready to enter the weekend atop the leaderboard at -10. But a bogey on the 18th, after a missed 6-footer, dropped the 24-year-old Japanese star out of the top spot.

“Yeah, I think I normally putt pretty well here. I really like the greens. They’re rolling perfect. I seem to see them pretty well. I’ve just never had much trouble with the lines off the tees and things like everything just kind of makes sense to me, for whatever reason. Certain weeks just make sense, and other weeks you just can’t quite figure them out. This has always been a very comfortable place.”
–Brendan Steele, Co-Leader – Waste Management Phoenix Open