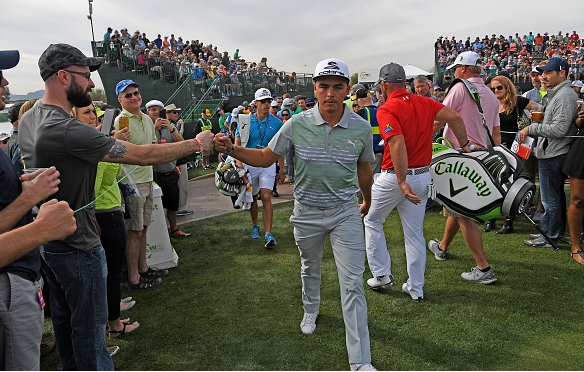 In yesterday’s first round of the Waste Management Phoenix Open, there were tons of exciting moments, and today was no different.

The best players in the world always seem to have their best ready to go for the biggest crowds.

In case you missed some of the action from today, here are the best moments from the famous par-3 16th.

Watching one of the best golfers in the world, Jordan Spieth, is definitely something that gives you the chills. In addition, his playing partner, Rickie Fowler, gave the crowd something to cheer about.

Walk through the tunnel with @JordanSpieth.
Tee off with @RickieFowler.

They were LOUD for the Featured Group. #QuickHits pic.twitter.com/PrXXIbxUQa

Holmes Experienced It All

After hitting his tee shot over the green, J.B. Holmes heard nothing but boos. However, Holmes went on to chip it in for birdie and that definitely satisfied the packed house.

What a hole for a chip-in birdie!

Bubba Watson, who is known to quiet the fans constantly, gave the fans something to cheer about. By the way, the fans were this loud at 10 in the morning.

Tune in tomorrow for more great moments from Round 3 at the iconic 16th.