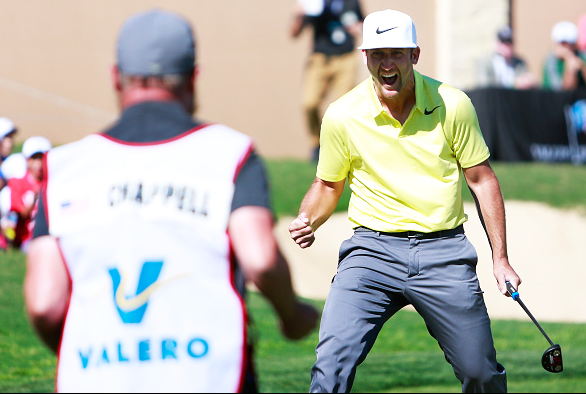 Kevin Chappell had become an expert on finishing runner-up. He had six of them in his 180-start career, with four of those coming just last season.

The last one of those was especially painful, as it occurred at the Tour Championship where he was unable to come out front in a playoff with Rory McIlroy and Ryan Moore.

Now, in 2017, Chappell finally decided he had had enough of that. Starting the day with a one-stroke lead, Chappell was grouped with two players (Branden Grace and John Huh) who played awful, but Chappell was able to stay composed and play his own game.

With a 4-under 68, Chappell stared down furious rallies from a suddenly-upstart Brooks Koepka and young bomber Tony Finau to finish at -12 and win the Valero Texas Open by one stroke, the first victory of his seven-year PGA Tour career.

How Chappell Did It

Being in this position and failing so many times before, Chappell was likely nervous, but if he was, he sure did not show it. With birdies on 2 and 3, he gave himself an early cushion. He stayed -2 through the turn, and kept his form on the back, holding out front despite Koepka and Finau coming at him aggressively.

Just as Chappell looked close to pulling away, however, an untimely bogey on 15 dropped him one closer to the field, and suddenly, after a Brooks Koepka birdie on 18, the score was tied.

After a clutch par putt on 17, Chappell hit his drive on the par-5 18th a bit left, but was able to fade it just inside the left edge of the fairway. He pitched to 8 feet from the hole on his third shot, and when he confidently drained his birdie putt, his long victory wait finally came to an end.

What It Means For Chappell

After his round, Chappell expressed relief that he would never again have to answer questions about when he will finally snag win #1. That’s an enormous weight off his shoulders that could very well benefit the 30-year-old in future tournaments.

Chappell had actually been playing poorly in 2017, finishing outside the top 30 in his first 11 starts of the season. He got back on track two weeks ago with a T7 at The Masters, although he never threatened the lead there.

It was enough to give him confidence in San Antonio. In a difficult week weather-wise, at least on Friday and Saturday, Chappell was the only player in the field to shoot each of his rounds under par, posting 69-68-71-68. He also lead the field in birdies for the week, with 22 total.

Similar to Chappell, Brooks Koepka had started off terribly in 2017, in spite of a successful 2016. And like Chappell, Koepka had finally shown signs of life lately, finishing T9 at the WGC-Match Play and T11 at The Masters.

Starting the day in 12th place, Koepka knew he needed to go low to have a chance, and that is exactly what he did. He played his front-nine at 4-under, highlighted by three consecutive birdies on 6, 7, and 8. He stayed hot on the back, coming in at 3-under par and posting a round that tied for the tournament low, a 7-under 65.

Kevin Tway has found living his father’s shadow difficult, but with his 3-under 69 on Sunday, the son of 8-time Tour winner, Bob Tway, had his best showing in a PGA Tour event – finishing in a tie for third place.

Sung Kang quietly snuck his way into the top-10, finishing his round birdie-birdie-birdie for a 4-under 68, which left him at T6. It was the third straight great result from Kang, who in his previous two starts had finished runner-up at the Shell Houston Open, and T11 at the RBC Heritage.

Wishing For a Sunday Do-Over

The most significant drop of the day came from John Huh, who was tied for second when the day started. Huh took himself out of contention on the front-nine with three bogeys and a double before the turn. An even-par second nine left him at 5-over 77 for the day, finishing at T22.

For 16 holes, Camilo Villegas may have been the best player in the field. With birdies on five of his first six holes, Villegas quickly got into contention. Unfortunately for the Colombian, who has struggled to regain his past great form, a bogey, double-bogey stretch on 10 and 11 took the wind right out of his round. He still finished with a 2-under 70, which was good for a T10, but he’ll certainly be thinking about those two holes that cost him a shot at the tournament.

“I’m just excited that I don’t have to answer that question of what I have to do to win again. Obviously, there’s some excitement and some frustration and a lot of joy right now.”
– Kevin Chappell, Valero Texas Open winner