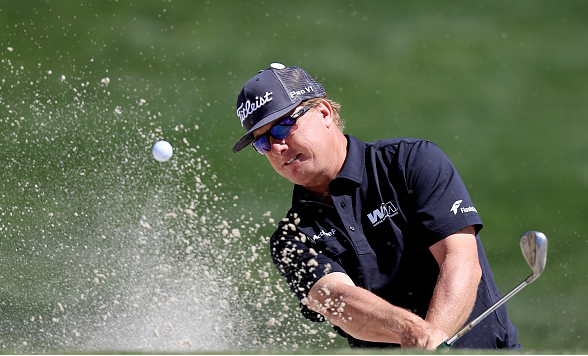 It has been a rough season so far for Charley Hoffman, as the 12-year tour veteran has missed six cuts in his 10 appearances. Playing the Arnold Palmer Invitational Presented By Mastercard, however, Hoffman has figured something out that often is conducive to success in golf: he has both the most birdies and the least bogeys of anyone in the field.

In the second round, his lone bogey came on the first hole, and from there, Hoffman birdied 7 of 17 holes to shoot a six-under 66, which tied two others for the low round of the day.

At -10 for the tournament, Hoffman leads round one co-leader Emiliano Grillo by one stroke, and Matthew Fitzpatrick by two.

How The Leader Did It

The UNLV alum has also been giving himself plenty of birdie chances with his accuracy, hitting 12 of 14 fairways and 13 of 18 greens in regulation. He carded a 3 on exactly half his holes on Friday.

Happy With Their Day 2

After a dismal six-over 78 in round 1, European Tour regular Tommy Fleetwood looked like a long shot to even make the cut. Whatever was ailing him in round one, however, appears to have been remedied.

After an opening-round where he carded seven birdies, Fleetwood was bogey-free on Friday and shot a six-under 66, which tied for the low round of the day. It was an impressive bounce-back, moving up 69 spots on the leaderboard.

In addition to Hoffman and Fleetwood, the third player to shoot a 66 today was Marc Leishman, who played both nines in bogey-free three-under to reach his low round.

It’s another great round for Leishman, who is quietly putting together a fantastic season, with finishes inside the top-30 in six of seven events.

Jeunghun Wang, a 21-year-old South Korean star, already has three career victories on the European Tour. Playing in the US for the first time in a non-major PGA event, Wang balanced out three bogeys with five birdies and an eagle, to shoot a four-under 68. Wang is currently in a tie for 8th place.

Yesterday we raved about Trevor Immelman’s two-under 70, an incredible round given how far he has fallen since his 2008 Masters win.

Whatever he had going for him in round one, he lost it in the second round – posting a birdie-free round of seven-over 79 and missing the cut by several strokes. Immelman averaged fewer than 270 yards per drive and only hit four fairways.

Kevin Chappell was the runner-up at Bay Hill last year, but after a two-over 74, that dropped him 20 spots on the leaderboard, he is now very unlikely to replicate that finish. Chappell is +2 for the tournament.

John Daly making the cut would have been incredible both for him and for the tournament’s ratings, but after a five-over 77, he will not be playing the weekend.

“I put the ball in play off the tee, which I think is pretty key to this golf course; if you can get in the fairway, you can attack, the greens are surprisingly receptive, which is nice because you can shoot at some of those pins that in the past you haven’t. I took advantage of that.”
–Charley Hoffman, second round leader