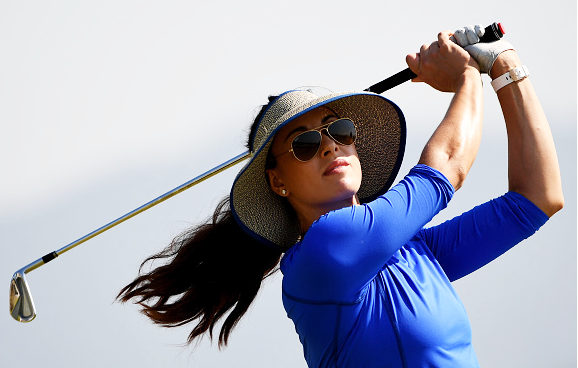 Gerina Piller did not grow up thinking about the gold medal, because it was never an option. She gets emotional thinking of getting one now.

Piller tears up just talking about the gold medal.

Winning a medal would be especially meaningful for these women.

1. Maria Verchenova, Russia – As recently as a few weeks ago, it was not known if Verchenova would be allowed to play as Russia was the subject of a big doping scandal. Verchenova was cleared, and is the only golfer, male or female, at The Olympics.

Golf is not big in Russia, both because of poor natural conditions, but also because the country has not been able to afford to build them. The Russian men do not even have a golfer in the top 1800 of the world rankings. A Russian medal in golf would bring great attention to the sport.

2. Aditi Ashok, India – The 18-year-old from Bengalore is the youngest golfer in the field, male or female. India’s name in the golf world has slowly been rising, but still has a way to go before it will be internationally recognized.

It helped when Arjun Atwal won the 2010 Wyndham Championship, but it needs more. Ashok medaling would be huge.

3. Shanshan Feng or Xiyu Lin, China – Despite its enormous population, China has not made a huge footprint on the golf world. There have been improvements, but they get overshadowed in Asia by the South Korea powerhouse.

Feng won the 2012 LPGA Championship, the first major taken by a Chinese native, and is having a good year on tour, but landing on the podium would be great for national exposure.

Hopeless Moment of the Day

Norway’s Suzann Pettersen sent her tee shot into the worst place you can, while still staying on the course.

The stuff nightmares are made of… #OlympicGolf

The Baltimore Orioles started off their game against the Boston Red Sox, by having Quicken Loans National winner Billy Hurley III throwing the first pitch. The QLN was held nearby at Congressional Golf Course.

Know Who You’re Stealing From

A thief in Tulsa stole some golf clubs. He may have thought twice had he known they belonged to a retired, short-fused Cop.

Jamie Sadlowski, the world’s highest-profile long drive champion has decided to give up the long-drive game and focus on becoming a competitive golfer. His personal best long-drive was 445 yards.

In honor of the retirement of long-drive champion Jamie Sadlowski, we decided to shine some light on the drivers he uses for his record drives: the XR driver from Callaway.

That time we teamed up with @jamiesadlowski.ca and @dudeperfect for a mind blowing XR Long Drive Trick Shots video (that just surpassed 10 million views on YouTube, btw). #2015Faves

The championship will be shown over the next three days on FoxSports 1. The favorite is Maverick McNealy, the Stanford star who is currently the world’s #1 ranked amateur.

It is a great opportunity to see the future of the game.

The first gold medal given for golf in 112 years reached its new home, the home of gold medal winner Justin Rose, wrapped around a rear-view mirror.

The women are teeing it up at the Olympics for the first time since 1900!

Women's #golf returns to the #Olympics today for the first time in 116 years! Best of luck ladies! @OlympicGolf pic.twitter.com/18OvA6i84l

Drinks Are On Andy!

The European Tour is in Prague this week for the Czech Masters. As part of the pre-tournament festivities, a closest to the pin contest was held. English golfer Andy Sullivan won the contest and its much desired prize: a year’s supply of beer.

And won a year's supply of beer! ?#CzechMastershttps://t.co/lVgbzH87kM

Around the Tours: 5 Top Shots