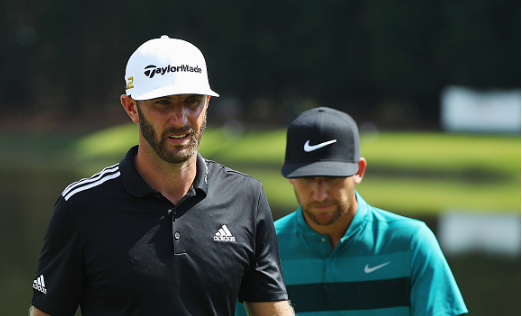 It took two-and-a-half rounds, but Dustin Johnson has finally shown signs of mortality, and now going into the final round of the final FedEx Cup playoff event, we have a tournament.

After three birdies on the first six holes, DJ was at 10-under, up by four, and threatening to run away with both the Tour Championship and the $10 million FedEx Cup. However, he found the back nine more difficult today, and following two bogeys (13 and 14) and a double-bogey (on 17), Kevin Chappell was suddenly in the lead.

DJ rebounded with a birdie on the par-5 18th, and after three rounds, DJ and Chappell are co-leaders at 8-under – two strokes ahead of Rory McIlroy and Ryan Moore. Suddenly, this thing is wide open!

As mentioned above, this was a tale of two halves for Dustin Johnson. He got off to that hot start with birdies on 4, 5, and 6, but played three-over from the 7th on, including a double bogey on the 17th hole, which led to a significant swing when playing partner Kevin Chappell birdied the same hole.

Chappell was unflappable in round 3, shooting a 2-under 68, his second bogey-free round of the tournament. Chappell only has one bogey for the entire tournament. At nearly 80%, Chappell leads the field in greens in regulation.

An astonishing five players in the top 10 shot a four-under 66, the low round of the day. Those five were Rory McIlroy, who was bogey-free and may be the biggest threat to DJ for the FedEx Cup; Ryan Moore, who birdied four of his first seven; Jason Dufner, who went out in five-under 30; Charl Schwartzel who eagled back-to-back holes (6 and 7) at one point; and Emiliano Grillo, who is back under par after going 3-over in round 1.

Bubba Watson also shot a 66, which could be significant for him. He is likely too far back to become a factor in this tournament, but it may keep his Ryder Cup hopes alive, with one spot on the roster still to be determined.

Kevin Kisner was in shouting distance of the lead after two rounds, but a 6-over 76, the worst round of anyone in the field, dropped him down into a tie for 20th – eleven strokes behind DJ and Chappell. Four bogeys and a double over his first 8 holes, ended any hope he had for a victory.

Adam Scott was in a great position going into this event (third in the FedEx Cup), but a double bogey, triple bogey stretch on 7 and 8, exterminated his hopes. He did have five birdies, but still finished one-over for his round.

Among players with a realistic chance, DJ and Paul Casey are the only players who could take home the FedEx Cup (and its $10M bonus check) with a win in this tournament. Casey is at -3, four strokes behind the lead.

Rory McIlroy with a hot hand is a scary thing for the field, and if he is able to overtake the leaders, as he did when he started the Deutsche Bank Championship six strokes back going into the final round. Even with a victory, Rory would not automatically win the Cup, as he would need Dustin Johnson to not finish solo-second, a position he is one stroke ahead of being in.

“I was so proud of myself the way I hung in there, ground out the end of that front nine, and was able to turn it around. I think you saw it in the emotion with the chip-in on 12.”
–Kevin Chappell, 54 hole co-leader

Some Observations on the 85th Masters Tournament