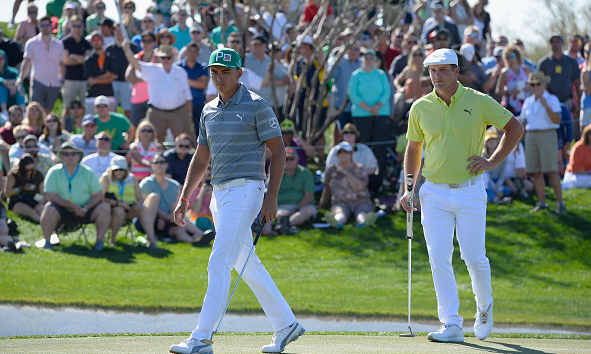 Rickie Fowler closed with three-straight birdies on Saturday to post a 67 and secure the 54-hole lead at the Waste Management Phoenix Open. 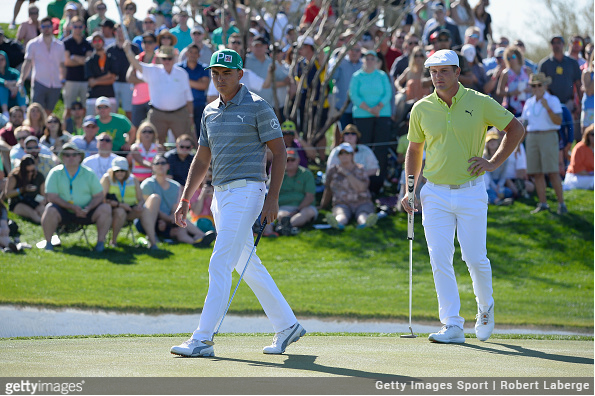 The 28-year old star finished his day in Scottsdale with five birdies against one bogey en route to a three-day total of 14 under par.

“I’m just happy with the way that both Joe and I kind of hung in, stayed patient. Turning in even par and then getting through the start of the back nine, which can be tough, and then taking advantage of some of the holes coming in,” said Fowler, who posted his 12th consecutive under-par round at TPC Scottsdale.

“It would have been nice to get 15 as well, having 5-iron in. But birdieing the last three and putting yourself up front going into Sunday is the right spot to be.”

DeChambeau, who shared the 36-hole lead with Fowler, briefly moved into the lead at 14 under following three-straight birdies on 13, 14 and 15, but dropped a shot at the 17th to finish with a 68, one off the lead at 13 under.

“Coming down the stretch I kind of lost it on 16 hitting it a little hard past and like, whoa, I didn’t expect that, usually I’m really good at controlling downhill putts. So that was kind of a spook. And on 17, the sun kind of got in my eyes with the corner and just hit me a little bit and kind of flinched on that one a little bit,” said DeChambeau, who hit 13 of 18 greens on the day.

“Unfortunately it bounced in the water, just really unfortunate there, was trying to keep it short of the water.

“But I think, again, if I can control my rhythm and hit a couple fairways and hit some greens, obviously, and give myself a lot of good looks I’ll be fine.”

Chez Reavie (67), was also at 13 under, alongside fellow Arizona State product Jon Rahm, who finished with four birdies over his final six holes, including three-straight on 15, 16, and 17 to sign for a 65.

“I hit the ball really well off the tee, gave myself a lot of opportunities. But the main key today was my iron play,” said Rahm.

“My game was a lot more accurate than the first few days and thanks to that I had a couple better birdie chances and a couple more went in.” 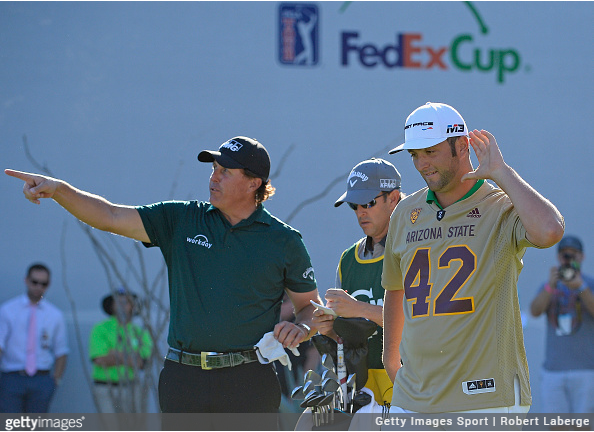 Three-time tournament winner Phil Mickelson carded a bogey-free 5-under 66 to join Xander Schauffele (65) and Daniel Berger (68) at 12 under.

“Iron play has been really good, that’s been kind of the strength. I’ve driven it very average, which is great for me. It’s above average for me but average for the field, that’s all I’m striving for,” said Mickelson.

“I haven’t given too many shots away off the tee and that’s been helpful.”

First-round leader Bill Haas overcame three-straight bogeys on hole Nos. 8-10 to close with five birdies on his final eight holes to sit T8 at 11 under, alongside a group of five others.

“I birdied three of the first six, was feeling pretty good, but at the same time that motivates you knowing that you’re getting beat pretty easily here,” said Haas.

“Then obviously the way I bogeyed the 8, 9 and 10, going back to even par, feeling like I’m out of the tournament. So to finish with five birdies, very pleased with that.”

Through three rounds of play.

“It would just kind of be a long time coming in a way. I know we can win here, we have obviously been in the position to do it, love playing this golf course, I know can I play it well. So it’s just a matter of time. It would just be nice if it was sooner rather than later.”
– Rickie Fowler