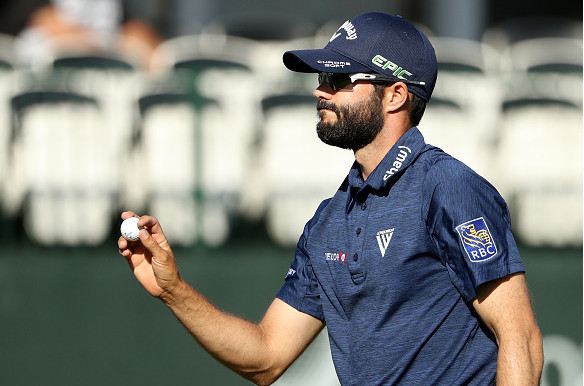 In just nine 2017 events, breakout Canadian Adam Hadwin has already made more money than he has in any individual season on tour. After a sizzling back nine at the Valspar Championship that included five birdies in a row, Hadwin looks ready to cash in again.

Following a second round seven-under 64, the diminutive Hadwin is at -10 for the tournament, which gives him a one-stroke lead on round one leader Jim Herman and two on South African Tyrone Van Aswegan.

On a difficult Copperhead Course where last year’s winner was just -7, six players have already reached that score after just two rounds.

After a round 1 three-under 68, Adam Hadwin was on the periphery of the top 10, but still six strokes out of the lead, he was not making much noise.

His first nine on Friday was more of the same, with two birdies and a bogey he was doing well, but not really threatening the lead. Then the back nine happened. Starting from hole #10, Hadwin went birdie, birdie, birdie, birdie, birdie, and later added one more on #17, for a back nine 29, the best golf we have seen from him since his 59 at the Careerbuilder Challenge in January.

Hadwin was deadly accurate in all phases of the game in round 2, hitting 11 of 13 fairways, 14 of 18 greens in regulation, and gained over three strokes on the field in putting alone.

Only two players were within one stroke of Hadwin’s Friday 64, one of those being Tyrone Van Aswegan who, like Hadwin, had 8 birdies on the day, on his way to a six-under 65. His scorecard had a lot more color than it did on Thursday, when he had 2 birdies and 16 pars.

The other came from Harris English, who bounced back from a terrible round one 77, to tie Van Aswegan’s second round 65. Patrick Cantlay is back in the top 10 after a second-round 66, which got him to -5 for the tournament.

In what could be the best PGA comeback story in years, Cantlay is attempting to regain tour relevancy after personal tragedy, and years of injury and swing issues

Jim Herman had nowhere to go but down after his round one nine-under 62. An even-par 71 in round two is not bad at all, but it was nine strokes worse than first round. After nine birdies yesterday, he had just two today.

Seamus Power plummeted from 5th to a tie for 32nd after four front-nine bogeys and a double on 18 led to a three-over 74. Strangely, Power was eight strokes worse on Friday than Thursday, despite hitting nearly twice as many fairways.

Webb Simpson has been having something of a resurgent year, but a four-over 75 in round 2 dropped him 46 spots on the leaderboard (T6 to T52), and left him just one stroke ahead of the cut line.

Justin Thomas, who has three wins on the season, but #4 will not be coming in Palm Harbor, Florida.

It looked like he had emerged from a one-month funk when he contended at last week’s WGC-Mexico, but after a second round that included five bogeys, a double, and a lot of missed putts, Thomas is at +3 for the tournament, three shots short of making the cut.

“I hit some more quality golf shots today, I gave myself a ton of looks out there, a lot of fairways as well, which makes it a lot easier to attack some of these flags, and the putter stayed hot; I made a few more than I did yesterday.”
–Adam Hadwin, second round leader