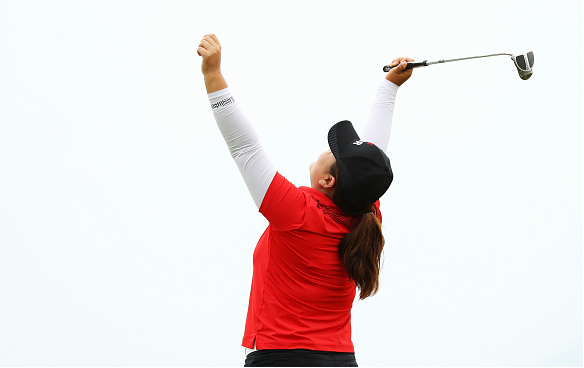 With all the talk about the young guns and the big three on the LPGA, Inbee Park said, with her play, “don’t forget about me!”. After shooting a final round 66, winning the first gold medal for women’s golf in 116 years, nobody will.

Park, the biggest question mark in the field coming into the week due to injury, poor play, and missed time, was dominant all week, shooting a five-under par to take second place after one day, and then leading after 36, 54, and 72 holes.

With a five-stroke victory, Park, from the women’s golf mecca of South Korea, now has a gold medal to emphatically add to her illustrious career, a career which includes 18 wins, 7 majors, and a place in the LPGA Hall of Fame.

Park injured her thumb early in the year, leading to a very poor season up to this point. She was entering tournaments at less than 100%, trying to get the requisite starts to make the Hall of Fame, and played like what would be expected from someone who isn’t 100%: terribly. She had not played the weekend since mid-April and missed the last two majors entirely. There was every reason to question her coming in, but there is no doubt now: Inbee Park is still a star.

One great thing about the Olympics is that second and third place matter. Park took the drama out of the race for gold early, but the battle was intense for the silver and bronze. With a birdie on 18 after a modest final round of two-under 69, world #1 Lydia Ko of New Zealand won the silver, with China’s Shenshen Feng took bronze. Missing the podium by one shot was Japan’s Harukyo Nomura, Korea’s Hee Yong Yang, and American Stacy Lewis.

How She Did It

Park had a two-stroke lead over Ko and Piller going into the day, but it did not take long for her to establish herself as the clear leader. Piller fell out of contention early when she bogeyed the first two holes, and Ko was +1 after six.

When Park birdied 3, 4, and 5, she opened up a six stroke lead and never looked back. From there, nobody got closer to Park than three strokes back. Park shot -1 on her back nine, after that -4 on the front, good for a 66 and the gold medal.

What Now for Park?

At only 28 and a still in elite form, Park could have many successful years left on the LPGA Tour if she wants to. The question is, does she want to? Park has accomplished everything that can be accomplished in women’s golf, she has won majors, she is in the Hall of Fame, and now she has a gold medal.

Earlier in the year when Park was entering tournaments she wasn’t healthy to qualify for the Hall of Fame for this year, it fueled speculation that she might be ready to retire. She has shown a desire to start a family, and if she left now, she will not have left anything out there. It is a definitely a story to watch going forward.

Closing with the Course Record

Maria Verchenova was the only Russian golfer, female or male to represent their country in the Olympic games. Golf has struggled to grow in that part of the world, and a big-scale doping scandal kept a lot of Russian athletes out of the Olympics.

After three rounds Verchenova was at +5, but today, something clicked. Verchenova carded nine birdies and an ace in an amazing round of nine-under 62. The round broke the course record set in round two by Stacy Lewis. It is also better than the low round (63) that Marcus Fraser shot in the men’s Olympics golf.

“I think this could really be the highlight of my career, and I was lucky enough to have the opportunity and obviously I’m going to we have five major tournaments a year, and I play, and I’ve won a lot of major championships and obviously in the Olympic games you only get to do it once every four years and golf in 112 years, so being able to be standing here and representing South Korea and my golfing career is something very special and very meant to be. So I’m very happy to be… it’s a huge honor, and I think it could be the highlight of my career.” –Inbee Park, Gold Medalist