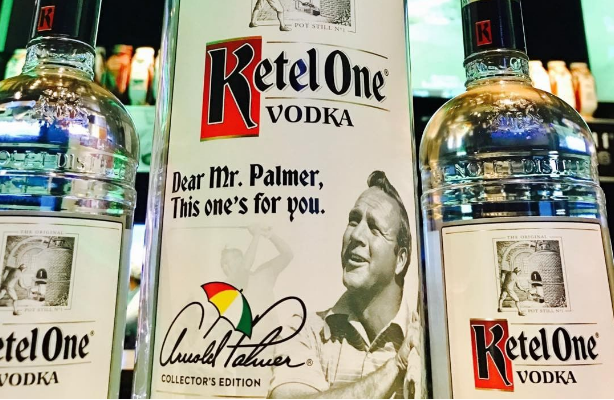 Apparently Arnold Palmer’s other favorite drink (other than his namesake) was Ketel One on the rocks with a twist of lemon.

“When he took that little sip of Ketel One, it was a moment he always looked forward to,” Nolet Spirits President and CEO Carl Nolet Jr. told Fortune Magazine, “That’s what he loved.”

To celebrate the relationship Arnie had with the Ketel One, Nolet Spirits (the maker of Ketel One) will begin selling a limited-edition bottle that features Palmer’s image and reads “Dear Mr. Palmer, This one’s for you.”

It’s the first time a person has been featured by the brand. The collector’s edition vodka goes on sale nationwide, today, March 16 with a suggested retail price of $24.99 per (750ML) bottle.

According to Fortune Magazine, Nolet Jr. met Arnie at a California golf course, and the two formed both a friendship, and working relationship, after learning that Mr. Palmer enjoyed the vodka brand.

“It was never a traditional sponsorship where you pay someone to represent your brand,” said Nolet Jr. Instead of paying Palmer as an endorser, Ketel One would reportedly sponsor his events, and donate to his charities.

As Charlie Mechem reminded us at Arnold Palmer's memorial service, "Everyone knows Arnold enjoyed a little Ketel One on the rocks with a slice of lemon." As we prepare to kick off a very special week at Bay Hill, I’d like to take a moment to toast my mentor and friend with his favorite drink. #ThisOnesForYouArnie #KetelOne #LifeWellPlayed @arniesarmycf . . . #golf #nbc #nbcsports @nbcsports #instagolf #golfaddict #pgatour @pgatour #arniesarmy #arnoldpalmer #theking @golfchannel #golfchannel @pgatourchampions #orlando #bayhill #charliemechem #arnoldpalmer