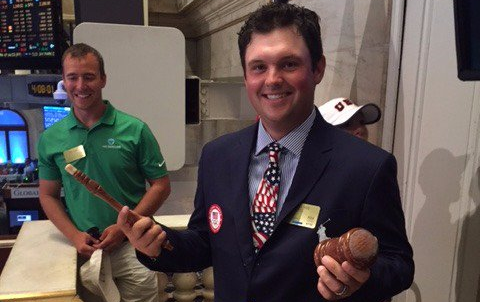 Patrick Reed hit the gavel a little too hard at the New York Stock Exchange and broke the head right off it.

This just happened after ringing the bell at the @NYSE !They told me to give it 3 good hits, so I did! pic.twitter.com/SGX26wTHAB

Patrick Reed slammed the gavel a little too hard at the New York Stock Exchange. pic.twitter.com/dats2s5z5U

Thank you @FedEx for all you do and inviting me to ring the bell @NYSE! We all had a great time!!!#FedExCupPlayoffs pic.twitter.com/pEmmCkUMBa

The first round of the PGA Tour’s FedEx Cup Playoffs is in nearby Long Island, at Bethpage Black Golf Course. A lot of players are making stops in and around New York City as part of a media tour. Jordan Spieth literally lit up the Empire State Building and made a stop at The Tonight Show.

Reed’s duties were simple: wait for the bell to ring, and then hit the gavel three times. Apparently he’s got a little aggression pent up waiting to smash some golf balls at The Barclays.

Needless to say, Reed probably won’t be invited back to the NYSE anytime soon.