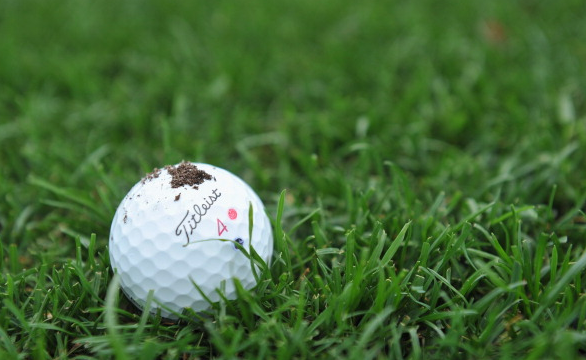 In case you missed the broadcast or the post-round interviews, “mud balls” became a major issue during round one of the Shell Houston Open.

Mud on a golf ball can have a substantial negative impact on its flight path and distance.

Here’s a round up of some of the big-name players commenting (and complaining) about the dreaded mud ball yesterday in Houston.

“I think the PGA TOUR has a rule they don’t play it up for mud. They play it up with casual water. There was no standing water out there on the golf course. Apparently in professional golf, mud is not an issue. It’s kind of one of the most frustrating things for us.”

On what makes a “mud ball” so difficult to play

“There’s no predictability to the golf shot. There’s a rule — there’s a school of thought that if the mud is on the right, the ball goes left. So, I mean, Jordan I think had mud on the right side of his ball on the 3rd hole, aimed in the right-hand bunkers and missed the green left. At that point when you’re playing away from the greens, hope the ball kind of scoots on to the green. It’s pretty tough to predict that stuff. I don’t have the trust to do that. I’m trying to hit the shot I hit and hope for the best.”

“There are a lot of times we play the ball up where it’s raining or it’s really wet and the mud normally shoots off the ball and it’s wet mud. This afternoon it was just ideal conditions to gather mud and then dry by the time we got up to the ball. That was about as difficult with mud that I’ve ever played in, and by the 3rd hole, we knew it was going to be like that.

We actually knew from the morning round guys had come in and said mud balls on every hole. I had heard the sheets were out before the first group to lift, clean and place and at the last minute decided not to. To be honest, it would have made more sense as a player obviously if we did play lift, clean and place. Also for the spectators. There’s a lot of shots that went into the crowd today when they were good iron swings. Kind of puts people in danger with pins tucked to the sides of greens. So, I was definitely surprised.”

“You just have to accept certain shots where you put good swings and not very close to the hole. It’s just kind of a level of patience. When you see an 8-under out there, though, you start to wonder how did Rickie necessarily figure it out and why are we only cruising at 1-over through 6. We really needed to be patient. Played the holes that don’t gather mud, the 5’s and 3’s where the 5’s, by the time you hit your third shot, it’s off. I played those holes 500 today. I feel like I’m striking the ball well and it was really good start. Had to deal with it. I felt like we had a good level of patience.”

“It was an issue for everyone, I’m sure. You know, I got off fairly lightly. I didn’t get too penalized. I hit some shots that finished further away on the green than I would have liked, but nothing in the water like I’m sure some other guys probably ended up with.

But, you know, that’s the call they make. That’s the rub of the green in golf. It’s hard to know what the right call is, I’m sure.”

“I was fortunate enough to take advantage of the par 3s, played them 3-under, and managed my way around nicely with mud balls all day as everyone else did. Yes, the golf course was gettable but tough when you’re playing in those kinds of conditions with mud balls. Not as much when you have wedges in your hands, but once you get some longer shots, longer irons to potentially woods going for par-5s in 2, it becomes a bit dicey.

I was — got fortunate on No. 10, my first hole the ball plugged in the fairway and was able to pick it up and clean it and start off with a nice birdie. Like I said, took advantage of the par-3s and was able to manage my way around.”