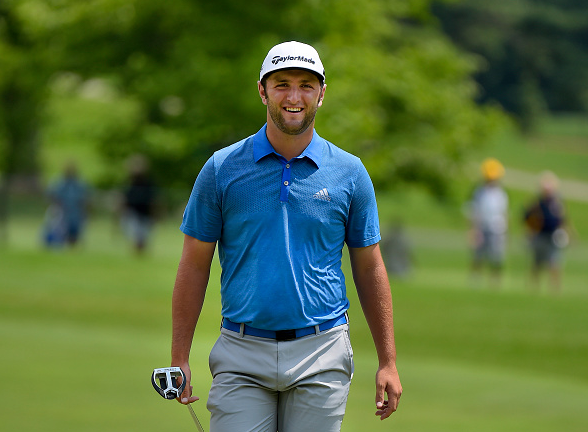 With world #1 Dustin Johnson withdrawing from the Shell Houston due to fatigue after winning his third straight start, Jon Rahm, the man who nearly pulled off a five-stroke comeback against DJ in last week’s WGC-Match Play, might be the hottest player in the field.

While this will mark Rahm’s first time at Houston, his inexperience may not matter, considering how incredible he’s been playing as of late. The Spanish superstar has finished in the top-5 in four of his past five starts, including a victory at the Farmer’s Insurance Open – the first win of his young career.

Rahm got his first taste of the Golf Club of Houston, during a brief practice round, and came away quite impressed.

“The golf course is amazing. It’s in absolute perfect condition and I wish I would have been strong enough or not tired at all to be able to play all 18 but I could only make it through nine today,” said Rahm.

The fiery 22-year-old is hoping to use this week to mentally prepare for The Masters, particularly in terms of calming his nerves.

“What I didn’t want to do was fly early to Augusta and spend too much time in Augusta and give — make it more important in my mind than it already is,” said Rahm during a Tuesday press conference in Houston. “By playing here this week, the earliest I can get there [Augusta] is Sunday night. Three practice rounds and try to think of it as one more week.”

Because the Golf Club of Houston is prepared in a way to assimilate the conditions of Augusta National – specifically relative to grass-type and over-seeding, Rahm feels this can also be of benefit to him, mentally.

“My caddie told me they try to prep this course pretty similar to what Augusta is going to be like. I don’t know about the speed of the greens. There’s not much rough. Obviously they’re different,” Rahm explained. “There’s quite a few holes where there’s some room from the fairway to the hazard. It’s going to be somewhat similar, and if mentally, I can get somehow ready for the Masters beforehand, you know, I think it’s worth to play this week.”

Since going pro after a T23 as an amateur in last year’s U.S. Open, Rahm has been consistently great, with just one missed-cut in 16 events – a span where he has finished in the top-5 six times.

Not enough good things can be said about Rahm’s performance as a professional, but it should not come as a surprise as he was an all-time great amateur, winning the Ben Hogan Award as the nation’s best collegiate player twice, and holding the #1 spot in the world amateur rankings for 60 weeks.

After last week’s runner-up finish in Austin, Rahm is already at No. 14 in the Official World Golf Rankings (OWGR), putting him in position to be one of the fastest ever to reach the world top-10.