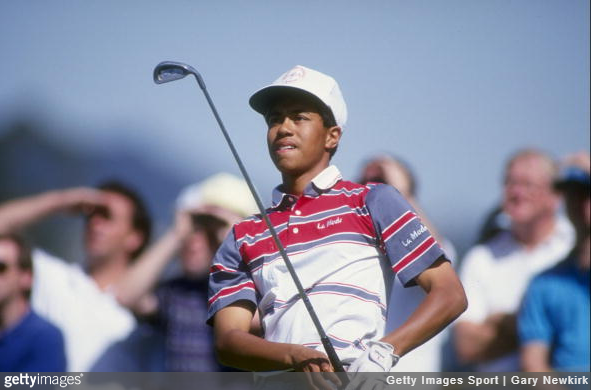 The year was 1992, and Woods was a scrawny 16-year old sophomore at Western High School in Anaheim, Calif., playing on a sponsor’s invite. The video features on-camera interviews with two of Tiger’s playing partners that week – Bob Friend, then a PGA Tour rookie, and Gary Hallberg, at the time a 12-year journeyman.

Woods described his first tee shot this way, “I felt fine on that first tee… I’m always nervous before a round. But when I took the club back, I never felt a club weigh that much. I smoked it right down the middle of the fairway, knocked it on the green, and made birdie. That’s how you want to start off your PGA Tour career, right?”

Jaime Diaz, who also appears on-screen, wrote it up this way in the New York Times on February 29, 1992:

PACIFIC PALISADES, Calif., Feb. 28— Davis Love 3d fired a scintillating eight-under-par 63 today to take a four-stroke lead after 36 holes of the Nissan Los Angeles Open, but 16-year-old Tiger Woods shot a 75 and failed to qualify for the final two rounds.

Love’s two-day total of 12-under 130 over the Riviera Country Club course broke the previous 36-hole tournament record of 11 under par set by Gibby Gilbert in 1983 and matched by Michael Allen in 1990. Love’s closest pursuers are Sandy Lyle and Tom Sieckmann at 134 and the 1990 champion, Fred Couples, and Rocco Mediate at 135.

Meanwhile, Woods, the youngest player ever to appear in a PGA Tour event and the defending United States Junior Amateur champion, closed with a two-day total of five-over 147 to miss the 36-hole cut by six shots. Nonetheless, Woods said he thoroughly enjoyed playing in the professional arena. ‘Learning Experience’

“I think these were the best two days of my life, because I never got so much support,” said Woods, who played before a gallery of about 1,000 fans throughout his round. “My game wasn’t there, but that was O.K. It was a learning experience, and I learned that I’m not that good. Eventually, I’ll be out here, but I’m not that good yet.”

Other video content in the reel includes a look at Jordan Spieth and U Texas standout Scottie Scheffler; and the top-10 ranked California golfers.