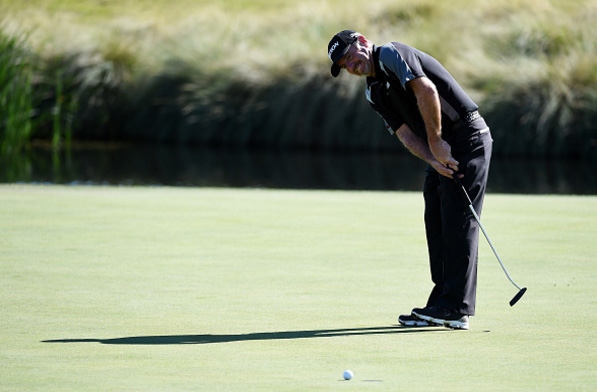 Rod Pampling shot a record-tying 11-under 60 in the opening round of the Shriners Hospitals for Children Open.

The 47-year-old Aussie needed just a lone birdie over the final two holes at TPC Summerlin to join the Tour’s 59 Club. But his 20-footer on 17 came up a bit short, while his 11-footer on the final hole pushed slightly to the right.

Despite missing the historic number, the two-time Tour winner is the clubhouse leader, and was excited about his round.

Not a bad way to start a tournament. pic.twitter.com/vl199MboRJ

“When I hit it close on 16, that got my attention as to this is a really good round.”

“The putt on 17 just fell short in the jaws and on 18 I gave myself a bad read. I thought it was straight, but it just had that little left-to-right. I would have loved to have made one for a 59, but it was just a good solid day all around.”

3. About The Final Putt

“I studied the last hole a lot, and I looked at the book — all these new books have the slopes and everything in it. I was looking at it and making sure I was spot-on. My eyes were telling me it was pretty straight. But I hit it straight. It was on line when it started. It just had a little tail on it. So I’m glad I gave it a chance. It didn’t come up short, so it was a decent putt. I just picked a bad line.”

“I’ve been hitting it quite well for at least two or three months. I just haven’t been driving it super. And I had my coach come yesterday and we just fixed up a little bit of that. So that was good. And the irons were great. We hit a lot of close shots. It was just nice and solid. There was nothing that was extraordinary, but it was just very good.”

“I think I need to get in the 20s (under) to have a chance for the win, so we will just keep working and also make sure not to get ahead of ourselves. It’s great to get off to a good start, there’s some life left in me yet, and hopefully we keep it going.”