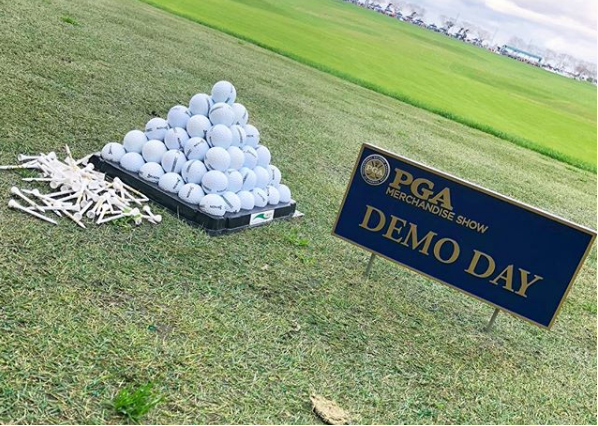 ORLANDO, Florida – Heralded by the sound of tens of thousands of golf balls being struck by the game’s newest equipment, the consumer part of the 2018 golf year officially got underway in Orlando Tuesday with Demo Day opening the 65th annual PGA Merchandise Show.

More than 100 companies surrounded the 42-acre circular range at Orange County National Golf Center and Lodge, showing off their latest wares to members of the golf industry.

Technology continues to change the way the game will be presented in your favorite pro shop or retailer this year, but touring the loop, it was apparent there were two separate, and perhaps competing, philosophies driving equipment development.

In one camp, you had a number of the game’s biggest brands offering new innovations that give golfers endless options, with ever-evolving materials and promised gains to the highest levels of performance. The prime emphasis continues to be in delivering increased distance, with top-of-the-line drivers priced appropriately.

In the other camp, though, some of those same companies, and also a group of smaller competitors, had their messaging focused on providing better performing equipment for less-skilled players, with the reward of better results for less swing speed or less-than-perfect ball contact.

The message was “technology is your friend and is worth paying for,” but the philosophies behind the approaches in the range of companies represented varied widely.

Driver powerhouse TaylorMade gave most attendees their first chance to experience their “Twist Face” technology on their newly introduced M3 and M4 metalwoods.

The concept was to try and find a new approach to golfer’s most common metalwood misses – high on the toe or low on the heel. “We began researching this issue three years ago,” explained TaylorMade engineer Matthew Greensmith. Club face alignments were adjusted in ways to counteract the negative impact of those misses, and according to Greensmith, the finished product reduces the misdirection of missed shots with the new metalwoods, on average, from 14 yards off-target down to three yards, which should result in a lot more fairways being hit.

One of those aforementioned smaller competitors was Vertical Groove Golf, an upstart that claimed significant attention at last year’s show.

Using the Vertical Groove driver, John Daly won his first professional title in 13 years at last summer’s Insperity Invitational on the Champions Tour. A company rep also proudly offered up that Kenny Perry is now playing it, with an impact so profound that the player who built his career around a reliable draw now sometimes hits a fade off the tee. Vertical is at this year’s show now introducing a companion 3-wood.

Titleist had a practice green set up to show off its new Vokey Design SM7 wedges, which won’t hit golf shops until March. Designer Bob Vokey has six sole grind options on these new wedges, the same ones favored by Jordan Spieth. If you feel you are a true artist in your short game versatility, each one of the six offers a different set of characteristics and possibilities.

For those who battle to control their wedge play, Cleveland Golf had on hand its newest wedge option – the Cleveland CBX, which is a more forgiving cavity-backed design from a company also generally known for making top performing wedges.

Cleveland also introduced new high-end offerings from XXIO, long a top name in Japanese golf equipment. That introduction came with a high profile announcement, as Ernie Els will be playing the XXIO gear.

Drivers were the highest profile clubs at other major names around Demo Day, such as Callaway, PING, Cobra, Tour Edge and Wilson. Wilson was also pumping a second season of their “Driver vs. Driver” reality club design show, which will again air on Golf Channel.

The 2018 PGA Merchandise Show kicks into another gear on Wednesday, when it takes up residence in trade show form at the Orange County Convention Center. More than 1,000 exhibitors will be on hand, putting their best foot forward for an estimated 40,000 attendees in what the show bills as “the world’s largest gathering of PGA professionals.”

While not open to the public, the show can be followed through substantial media coverage for its run through Friday, including live coverage on the Golf Channel and on SiriusXM PGA Tour Radio. A highlight expected on Wednesday is a keynote program announcing details about this summer’s 100th PGA Championship, to be contested Aug. 9-12 at Bellerive Country Club in St. Louis.