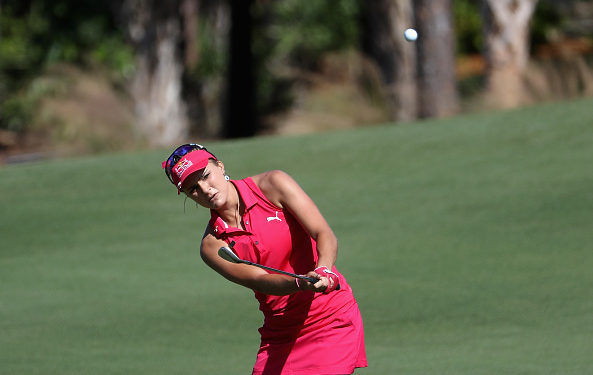 Sung Hyun Park started the day with a three-shot lead at the CME Group Tour Championship, and many expected Saturday would be the start of a two-day coronation for the 24-year Korean star. But after struggling to a 3-over 75, coupled with several of the Tour’s biggest names going low, the 54-hole leaderboard is loaded with stars and even more storylines. 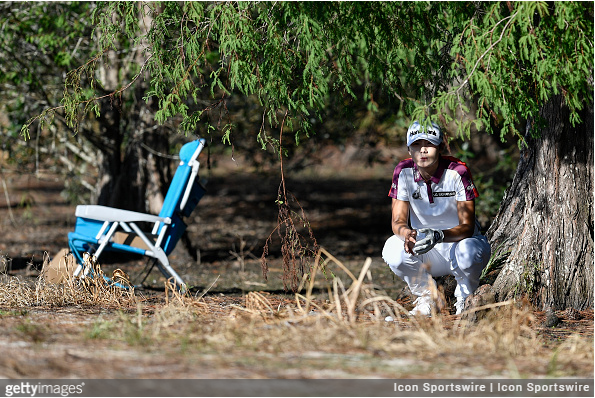 At the top of the board in Naples, at 10-under par, is a trio of big names: Michelle Wie, Suzann Pettersen, and Ariya Jutanugarn.

Also on top is little-known Kim Kaufman, who posted the day’s best round.

The South Dakota native entered moving day 10 shots back of leader Park, but following a low-round 8-under 64, coupled with Park’s struggles, Kaufman not only erased the deficit, she heads into the final round one-stroke up on the young Korean star.

Jutanugarn made a pair back to back birdies on the first seven holes (2-3 and 6-7) to quickly move to the first page of the leaderboard. Ten pars and a birdie to finish had the Thai star sign for a 5-under 67.

“I gained a lot of confidence this year,” said Wie, who will be in the final group with Kaufman and Jutanugarn on Sunday. “I had a really tough year last year, couple years. Just really feeling like my old self. Really feeling comfortable out there and having fun, and that’s when I play my best.”

After turning at even-par, Petterson finished her inward-nine with three birdies to post 69, and join the top bunch at 10 under.

One back is a group of seven players, headlined by Park and Lexi Thompson, who overcame a double bogey on the first hole, to finish with a 3 under 69 and move back into the No. 1 projected spot in the Race to CME Globe.

“I’m going to try a little something a little different tomorrow just to make sure that I’m nice and relaxed going into that first tee shot,” said Thompson, who credited caddie, Kevin McAlpine, with helping calm her temper after the first-hole difficulties. “There is always that little bit of adrenaline and just wanting to get playing and get out there and just get started. So there is always that bit of adrenaline, but you have to tame it and control it.” 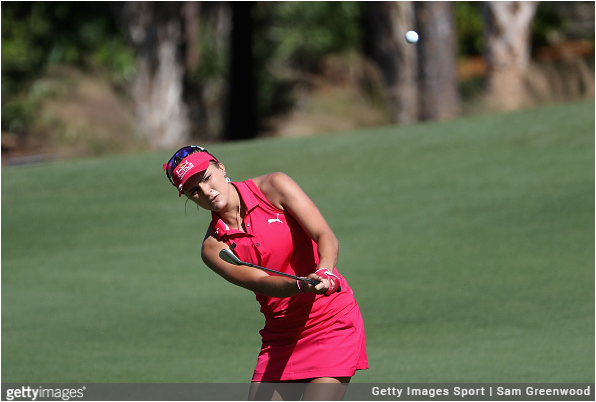 Park missed seven fairways en route to a disappointing 75, and squandered an opportunity to separate from the field.

“Over the course of four days there is always a day when you are not in top shape and that was today,” said Park. “Keeping your focus all four days is difficult. The key is how you cover up your loss of focus. There are a lot of top players on the leaderboard. The key tomorrow will be keeping my focus.”

Ernst had the day’s wildest round. The LSU alum turned at 9 under and appeared to be headed for the pole position. But after two nightmare holes at 10 (bogey) and 11 (quad), Ernst dropped five shots to 4 under. A remarkable five-hole stretch of three birdies and an eagle – Nos. 13-17, got the 25-year old back into the hunt.

TOP SHOT: LEXI STICKS IT ON 18

“I’m in a good position for tomorrow, but I am just going to focus on one shot at a time and just visualize my shots out there.”
– Lexi Thompson

“I think that it’s going to be really important to keep my focus going into tomorrow. There is a lot of top players right now at the top of the leaderboard. Keeping my focus will be key.”
– Sung Hyun Park