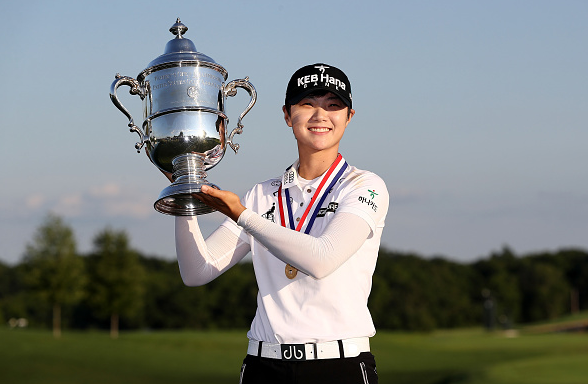 On the strength of matching weekend rounds of 67, the 23-year-old star finished at 11-under for the tournament, two strokes ahead of amateur Hye-Jin Choi (71), also of South Korea.

“I did not have the best first and second rounds,” Park said. “I wanted to believe in myself again for the final two rounds and I did.”

The win is Park’s first career LPGA title, and it virtually locks her in as the Rolex Rookie of the Year. It also moves her into a tie for second with Danielle Kang in the race for the Rolex ANNIKA Major Award.

China’s Shanshan Feng, who had led after each of the first three rounds, fell to fifth after a final-round 75.

“I did pretty well until the last hole,” Feng said. “Overall, I think I had a great week. Coming into this week I had no expectation at all.”

Park: The Performer of the Day

A clutch par on No. 18 capped off a round of 5-under 67 to earn Sung Hyun Park the #USWomensOpen ? and the @Lexus Top Performance of the Day pic.twitter.com/5DuqIaoczL

One of the cool traditions of the LPGA: The winner’s selfie.

“Well, to be honest with you, I still cannot believe that it is actually happening. It’s almost feel like I’m floating on a cloud in the sky. Of course, I did have many winnings in other tournaments, but winning here at U.S. Open means so much more and for that I am grateful and extremely happy.”
–Sung Hyun Park, 2017 U.S. Women’s Open Champion