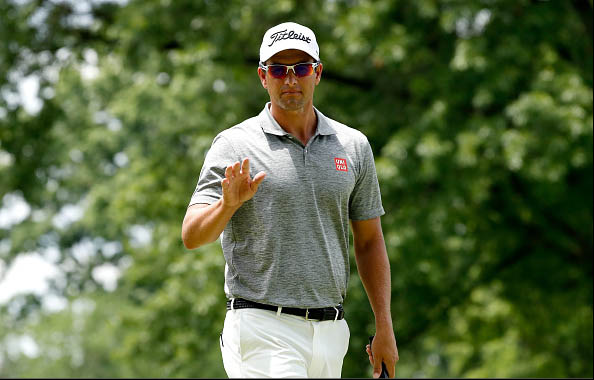 The WGC-Bridgestone Invitational has been wrapped up now for almost 24 hours. And in case you missed it, Dustin Johnson won again, and is now without question the hottest golfer on the planet.

A lot of the buzz afterwards centered around DJ’s fashion sense, as he wore the same Sunday styles at both Oakmont (for his U.S. Open win), and Firestone.

Is this now DJ’s Sunday Blue – similar to Tiger’s Sunday Red? We’ll soon see at Royal Troon in a couple of weeks, where DJ is one of the big favorites.

Speaking of style and fashion, let’s take a look at the Best Dressed golfers at Firestone this week. (Photos by Getty Images.)

The Sunday Blue with the NetJets logo on the collar gives DJ’s sponsor a nice impression but without the NASCAR look. The entire outfit is timeless. It’s the look of a champion. (His brother Austin is a pretty sharp dresser too.)

Classic but contemporary with the tight 2nd button fit, and shorter sleeves. The understated swoosh on the shirt goes perfect.

Spieth has the full Under Armour style, with a traditional blue/gray color scheme, in a classic loose fit. The under Armour logo is visible yet modest.

Scott is always one of the best dressed on the tour. In this outfit the Aussie goes with two lighter shades but uses the red Uniqlo logo for some contrast and splash. Plus those Oakley shades are always a difference maker.

Jason seemed to give a nod to his fellow Aussie, The Black Knight, with his all black Adidas look. After all the big WGC-Bridgestone Trophy is called the Gary Player Trophy.

Phil is another tour player who looks good in black, and wears it often. In this outfit, Phil gives off some nice contrast with dark and light. The Barclays logo actually blends nicely with the white and black Callaway glove. The style is classic Phil.