The FedExCup playoffs and its $10 million prize might be hyped as an event that literally anyone in the top 125 of the standings can win, but at the halfway point of The Northern Trust, the first event of the playoffs, it has been the stars that have come out to play. 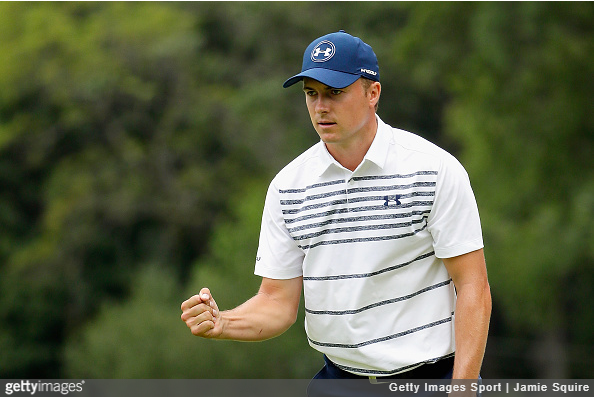 The 36-hole lead is being held by a quartet that includes three of the top five in the FedExCup standings: Dustin Johnson, Rickie Fowler, and Jordan Spieth, and another top 30 player with a recent win in Jhonattan Vegas.

Johnson was just 1 under on the day, following up a tremendous round-one 65 at Glen Oaks Club in its PGA debut, but the other three in the lead all shot 66 or better to make a sizeable leap to the top of the board.

Sitting one back of the four leaders is the always-steady Matt Kuchar and a player in Bubba Watson who has struggled in 2017, but chose the right week to get back on track.

World No. 1 Dustin Johnson has been slowly working back to his torrid pre-Masters form, when he won three times in 2017, with some positive results in recent tournaments, but these first two rounds in Old Westbury are the closest to it he has looked yet. 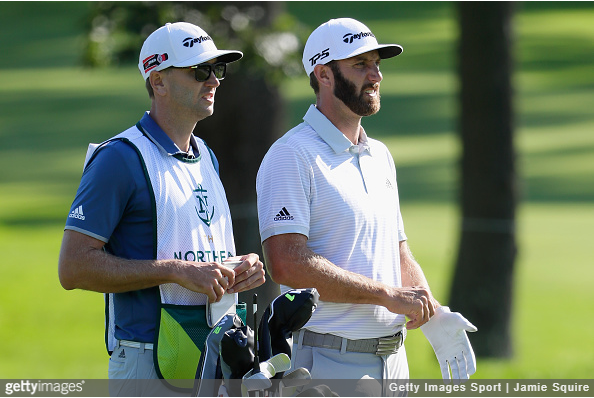 Starting the day one back of the lead, Johnson jumped back out in front early in his round with two bogeys on his first five holes, and played +1 from there for a 1-under 69.

Jhonattan Vegas, who won the recent RBC Canadian Open, was able to push aside worry for Houston, Texas, where his family is bracing for Hurricane Harvey, shooting a bogey-free 5-under 65 to get to that 6-under mark. 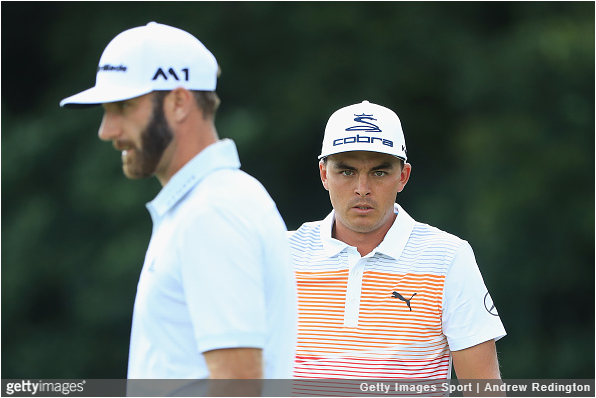 Rickie Fowler saved his best for his closing stretch, carding three birdies over his last six holes for a 4-under 66. Fowler missed just two fairways and three greens in his round.

Jordan Spieth’s opening round putting difficulties appear to be a thing of the past, as the Open Champion could not miss on the greens when he opened his back nine with five straight birdies on his way to a 5-under 65.

The low round of the day came from an unsurprising place: Matt Kuchar, who always seems to have his ‘A’ game at this time of year. 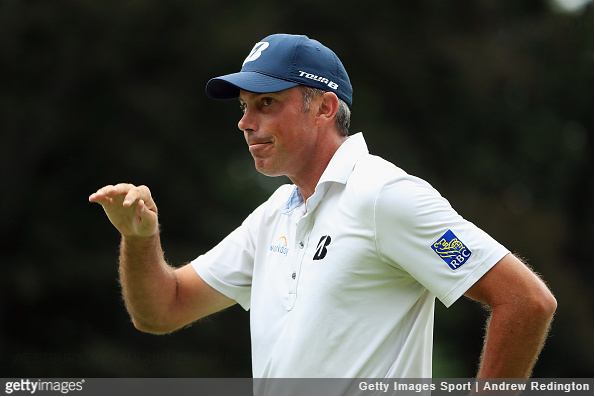 After playing his first seven holes in 2 over, Kuchar got red hot with birdies on 8, 9, 10, and 11. Back-to-back birdies at two other points on the back nine led to a 29 on his closing nine and a 6-under 64 overall, matching the first round of Russell Henley for the tournament low so far.

Xander Schauffele is a playoff rookie, but was well in control in a second-round bounce-back, carding six birdies and looking pristine on the greens in a 4-under 66 that allowed him to move into the top 10.

Phil Mickelson has been a mess as of late, and that recent poor play is putting his streak of Presidents Cup appearances in serious jeopardy. However, Phil looking much more like himself in round two, shooting a 2-under 68 that did not include the high numbers that marred his opening round. 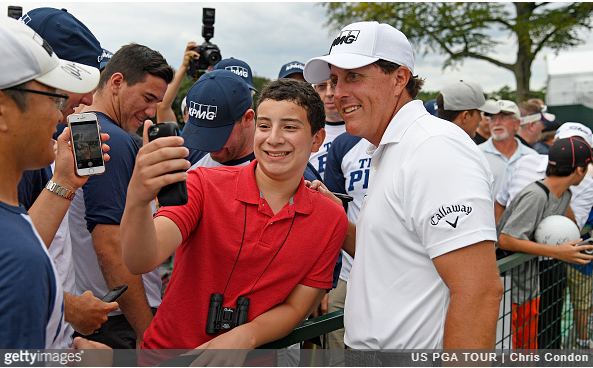 Now T32 and just six strokes back going into the weekend, the heavily pro-Mickelson crowd will be looking for more good play from the 47-year-old.

Russell Henley’s Thursday 64 made him the round-one leader, and his eight birdies was the best in the field. 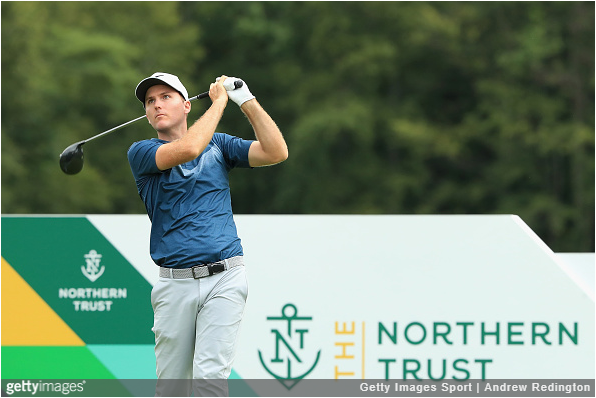 Round two was a much different story, however. Henley dropped from eight birdies to zero, and was terrible on the greens, posting a 2-over 72 to drop into a tie for seventh.

Nobody who made the cut shot worse than 74 in round two, making the 72 of PGA runner-up Louis Oosthuizen look even worse. The South African joined Henley in being birdie-free for the day, carding two bogeys and 16 pars.

Chris Kirk was just one off the lead coming into the day, but left it five back, as four bogeys and a double meant a 3-over 73.

Kevin Chappell made a playoff at the Tour Championship last year, but looked little like that man today, struggling through a pair of double bogey-bogey stretches for a 3-over 73 that dropped him 35 spots down the leaderboard, from T12 to T47.

Of the 125 who qualified for the FedExCup playoffs, The Northern Trust will eliminate 25 over four days of play. So far, only a surprisingly-low four players are projected to play their way from outside the top 100 to inside, led by Bubba Watson, who at T5 is projected to move from 113 to 49. 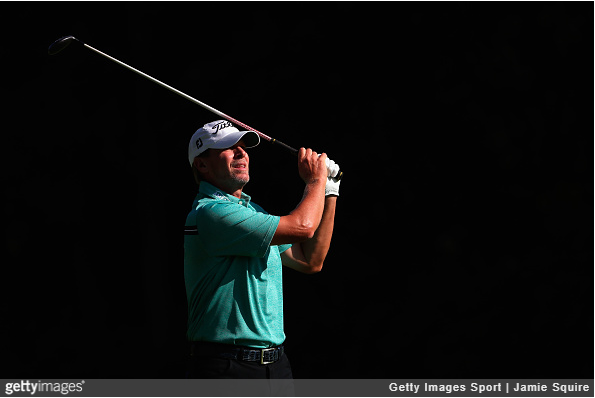 Those currently outside the top 100 who missed the cut can say sayonara to their seasons. Those include Presidents Cup captain Steve Stricker (113), who actually was pretty accurate off the tees and to the greens, but was unable to take advantage of his chances, carding just four birdies over 36 holes to finish 4 over and miss the cut by two strokes.

Rory Sabbatini (124) made the field off a very strong performance at last week’s Wyndham Championship, but he apparently left his best in Greensboro. Six bogeys over his last 12 holes on Friday meant a 3-over 73 and to finish at 5 over.

Jimmy Walker (101) finally put his disappointing season to bed. The 2016 PGA Champion followed up an even par opening round with a 5-over 75 and officially knocked himself out of the playoffs just one year after reaching the Tour Championship.

“As less guys make the next tournaments, you start to get players that are playing very well, and to no surprise, those guys are towards the top. Rickie ha been playing awesome. DJ has been trying to get his groove back but for him it wasn’t far off. It just needed to click. He seemed to be kind of using a couple different putters. Found one that’s working well for him.”