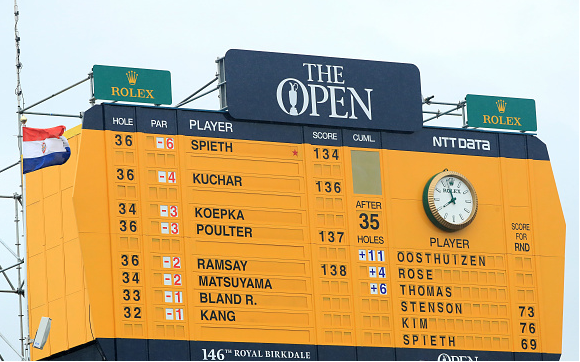 The Open Championship looked much more Open-like in round two. One day after surprisingly benign conditions led to a round one leaderboard with 39 players under par, the wind and rain came back out on Friday, ravaging that leaderboard and leaving just nine still under par after 36 holes.

One thing that did not change on that leaderboard, however, was the presence of Jordan Spieth at the top.

A 1-under 69, just one of eight under-par rounds on the day, has given the two-time major champion a two-stroke lead on Matt Kuchar, and three strokes on the surprising Ian Poulter and U.S. Open Champion Brooks Koepka.

Zach Johnson had the round of the day, a 4-under 66 to jump 100 spots up the leaderboard, and the most surprising good round may have come from 60-year-old 1998 Open Champion Mark O’Meara, who after shooting a field-worst 11-over 81 on Thursday, rebounded with a round of even-par, in what will be the last Open of his tremendous career.

After his second round 69, Jordan Spieth remarked that he thought he played better than his opening-round 65 showed yesterday, but that his second-round score reflected better than he had actually played.

All in all, it has been an impressive two days for Spieth, who is at 6-under despite hitting just 10/28 fairways (5/14 both days). He has had his misses, but he has still kept away from the extraordinary penal stuff, and his scrambling has been unbelievable.

Spieth had four bogeys on his round, which was four more than he had yesterday, but he had a lot of great moments in his round, which kept him in red figures for both the day and the tournament. He started off with a birdie on the first hole, but bogeyed 3 and 9 to make the turn in 1-over.

If he goes on to win this tournament, he may look at the start of his Friday back nine as the biggest reason why. He pitched in for par on 10, had a birdie on 11, and then birdied the par-3 12th, nearly holing it for an ace. He eagled the par-5 15th, but sandwiched it between two bogeys.

In the early wave, same as the afternoon wave, there were few great scores, but the best one undeniably came from 2015 Open Champion Zach Johnson.

A 4-under 66 jumped him an unfathomable 100 spots up the leaderboard to his current spot, a tie for 21st and +1. His second-round was nearly an inverse of his opening-round, as he had six bogeys to one birdie on Thursday, but five birdies to just one bogey on Friday.

Tied for the second-best round of the day was Rory McIlroy, who has made an incredible climb back from being 5-over through six holes in round one.

McIlroy had birdies on 1, 3, and 6, and then cruised in from there with two bogeys and another birdie for a 2-under 68. He now sits in a tie for sixth place at 1-under.

Masters Champion Sergio Garcia used an eagle on the par-4 fifth, to bounce back considerably from a mediocre round one 73. A 1-under 69 moved him 66 spots up the leaderboard, where he sits at 2-over, still well in it.

Tommy Fleetwood was possibly the biggest negative surprise in round one, as the Southport native had a birdie-free 76. He was much better on day two, as a 1-under 69 led to a 71-spot jump, allowing him to make the cut on the number.

Nobody dropped down the leaderboard as far as Zach Johnson rose up it, but a few had a drop just as significant.

Charl Schwartzel was in a tie for fourth to begin the day, after a round-one 66. He looked nowhere near the same golfer on Friday, as he absolutely butchered the back nine on his way to an 8-over 78, moving him down into a tie for 45th.

The man Schwartzel was tied with after round one, Paul Casey, was not much better. On his 40th birthday, Casey struggled early and never got back on track, making the turn in 5-over and posting a 7-over 77.

The biggest dropper of the day was Justin Thomas, who had maybe the single worst hole of the tournament.

After an opening-round 3-under 67, Thomas got off to a double bogey, bogey start and then lost any momentum he had left when he dropped four strokes trying to get out of some deep grass on the par-4 sixth hole, ending with a quintuple-bogey 9.

“Honestly, right now I’m happy to be inside, first and foremost. But I feel great right now. I wouldn’t expect anything different, I don’t think. I don’t think I even felt this way at the ’15 Masters after Friday — I don’t think I felt any different. But there’s a difference in how you sleep and how you get up and kind of how it hits you after.”
–Jordan Spieth, on his nerves as the 36-hole leader of the Open Championship