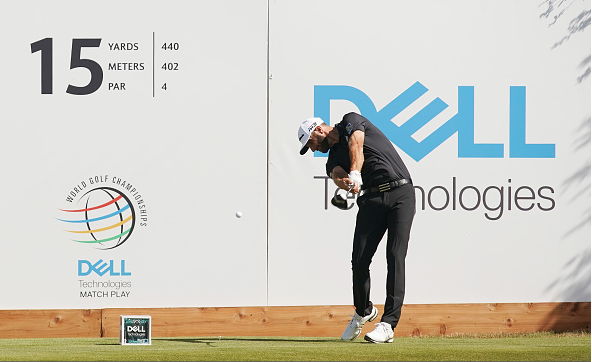 Just in time for Augusta, Bubba Watson might be the planet’s hottest golfer. Before we roll up Magnolia Lane, though, the LPGA steps into the spotlight for the year’s first major.

The Starter asks why a long drive in Match Play can’t set a record, and has a sudden urge to get into Palm Beach real estate.

1. After cruising at Match Play, Bubba’s back in Masters mix. Just six weeks ago, Bubba Watson was outside the top 100 of the world rankings for the first time since 2009. But he won at Riviera, then trailed for just eight of 109 holes in Austin. Suddenly, a third green jacket isn’t so farfetched.

2. The LPGA’s best gather for 2018’s first major. The ANA Inspiration conducts its 47th edition in the California desert, where So Yeon Ryu is defending champ and Lexi Thompson has to rehash the penalty nightmare of a year ago. Here’s hoping this year’s edition is remembered for golf shots.

3. The Houston Open gets set to tee off amid shaky footing. Despite wide acclaim for its work to replicate Augusta National’s setup, it’s tough to put on a tournament without a sponsor. Shell Oil ended a 26-year run after last year’s edition, and the Open is dipping into its reserves for a year.

On the final Monday of March, 51 can be the loneliest number.

That’s where Ian Poulter finds himself on this week’s chart, one place shy of receiving a Masters invitation after falling one round short of necessary at the WGC Match Play Championship. Anyone in the top 50 after the Match Play gets in, if he hadn’t already qualified.

Poulter, in fact, is the only man among the top 59 who doesn’t have plans for Augusta, factoring in other qualifying options. Next on the list is Charles Howell at No.60.

Nor did it help when Poulter was given bad information after reaching the quarterfinals that he’d done enough to crack the top 50. He got the corrected info 10 minutes before teeing off against Kevin Kisner. Whether the letdown played a role in his 8&6 loss, who knows.

“I should never listen to other people,” Poulter said. “When you finish a round of golf and the press and everybody is telling you you’re in the Masters, and then you get a text message 10 minutes before you tee off to correct everybody, to say, ‘Oh, we’ve made a mistake, actually, no, that was wrong, you’re not in. You need to go and win.’ … Not that that’s an excuse in any form or factor, it’s a little disappointing.”

The only way for Poulter to qualify now is to win this week’s Houston Open.

Dustin Johnson uncorked a drive down Austin Country Club’s downhill 12th hole on Friday that didn’t stop until it was 489 yards from where it began. That’s 13 yards longer than the PGA Tour record set by Davis Love III at Kapalua in 2004.

DJ’s drive, though, won’t go into the tour’s record book. Stats are unofficial at the WGC Match Play – which makes sense in terms of players not needing to putt out but, geez, a drive’s a drive.

Nor is Johnson’s blast the longest recorded by the tour’s ShotLink laser system. That’s a 498-yard poke by Tiger Woods at Kapalua’s 18th in 2002 – but because ShotLink wasn’t in use at all tour stops until 2003, it’s also unofficial.

Though armchair rules officials had been a bane on televised golf for decades, it wasn’t until Lexi Thompson’s tearful tale at last year’s ANA Inspiration that the tide turned strongly against the practice.

The young Floridian appeared on the verge of running away to her second major title, building a three-shot lead through 11 holes. But she bogeyed No.12, and things only got worse when she was approached by a rules official heading to the 13th tee.

A viewer email pointed out Thompson replaced her ball improperly on the 17th green a day earlier – she’d placed her coin to the side of her ball, but returned the ball in front of the coin. Two shot penalty. And two more for signing an incorrect Saturday scorecard.

Fighting tears at times, Thompson birdied three of her last six holes to take So Yeon Ryu to a playoff. Ryu, though, won with a birdie on the first extra hole.

Within three weeks, the USGA and R&A issued a new bylaw that allows for “reasonable judgment” errors in determining location. And in December, golf’s professional tours announced they would no longer take rules calls and emails from viewers, but a rules official would monitor each day’s broadcast.

The most famous hole on the LPGA circuit also has an island green, though splashdowns are highly encouraged – as long as it’s the golfer and not her approach shot hitting the water.

No.18 is built for drama, offering perhaps half the ANA Inspiration field a chance to reach the green in two. Players encounter a slight dogleg left off the tee, setting up the risk/reward decision on the approach. The green is large – good for holding long irons but often creating long putts.

In 2009, Brittany Lincicome watched her second shot roll within 4 feet of the flagstick for an eagle that leapfrogged her past Cristie Kerr. It remains the only major – men’s or women’s – in which a closing eagle determined the tournament outcome.

A year ago, Lexi Thompson – battling back after the infamous four-stroke penalty assessed nearly 24 hours after the fact – birdied No.18 to force extra holes with So Yeon Ryu. But the Korean pro won the playoff, as Thompson was forced to lay up after her drive found rough.

For a cool $49.5 million or so, you can now acquire the house built with Tiger Woods’ divorce settlement.

Elin Nordegren has put her oceanside, 11-bedroom North Palm Beach mansion on the market, secluded on 1.4 gated acres and offering the “most pleasurable resort-like lifestyle,” according to the listing.

Nordegren, who received $100 million in the 2010 divorce that followed Woods’ sex scandal, bought the acreage two years later and had the 1920s-era residence on the property bulldozed to start anew.

At 23,176 square feet, the home also features 15 full bathrooms, a rooftop terrace, a swimming pool with water slide and spa, a wine cellar and a three-story Swarovski crystal chandelier. Plus a guest house and four-car garage.

If the price tag’s a little out of your league, there’s also a chance to buy the two-bedroom condo where Nordegren resided while the big place was being built. That one’s listed for $2.25 million.

Poppie’s Pond, where the ANA Inspiration champion celebrates with a traditional plunge behind the 18th green, wasn’t always the crystal-clear waters seen in recent years. Until 2006, it was just part of Champions Lake that surrounds the finishing green at Mission Hills.

Over time, though, concerns about fish, algae and whatever else might be thriving in the water prompted officials to sterilize the locale.

Poppie’s Pond is now self-contained, lined with concrete and kept to a swimming-pool level with a constant replenishment of treated water.

“For me to stay focused, stay committed to my shots – there’s probably about four shots for the whole week that I wasn’t committed to. That’s pretty good for me.”
– Bubba Watson