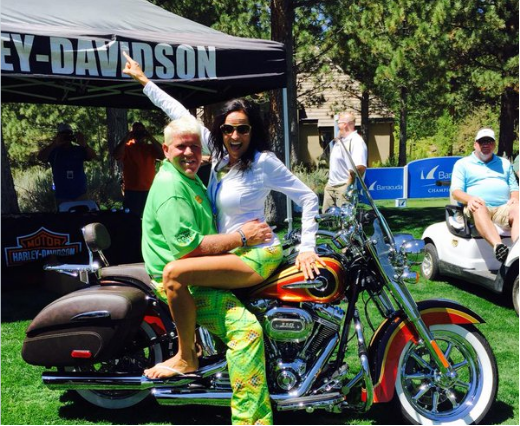 Nostalgia leads a lot of us to believe that sports were better when we were younger. It makes sense: those were the years that made us love sports. Whatever it was that attracted us feels more pure looking backwards. Regardless of nostalgia, however, it cannot be argued that sports were better without social media. Maybe for some of the players, but certainly not the fans.

Social media platforms, such as Twitter, Facebook, Instagram, Vine, and Snapchat, bring fans closer to the game than ever. We get to learn more about who these athletes are, not just what they can do with a uniform on. It is truly a revolutionary development that has changed sports for the better.

As far as the PGA Tour goes, here is a countdown of players who are the best with social media:

Justin Thomas, the 23-year-old University of Alabama product, embodies much of what golf fans love about the current young generation of players. Thomas is an amicable and easygoing guy who loves to be social and have fun, but does not come off as immature in doing it. He is one of a surprisingly short list of young athletes who you could have an epic, Barney Stinson-like night out with, but you would also be OK with him dating your daughter, and not just because he’s rich. He was a central figure in two of this season’s most entertaining side stories: #sb2k16 and The Open Championship Frat House.

Thomas has been great this year letting the fans into his life, both on and off the course. Prior to The U.S. Open at Oakmont, Thomas generated buzz with this video, highlighting how unreal the deep rough at the Pittsburgh-area course is:

We were all envious of him when he went on vacation after The Masters. It wasn’t just any vacation, it was THE vacation: sb#2k16 with close friends, Jordan Spieth, Rickie Fowler, and Smylie Kaufman, which he gave us an up-close look at. In a way, it felt like a real life “Entourage”, except that in this example, all four are famous.

Later in the year, when Thomas was paired in a #sb2k16 group with Fowler and Kaufman at the Quicken Loans National, he was the one who broke the news:

Thomas is one of the brightest young stars in the game (he had his first career victory this season in Kuala Lumpur), and seems to be well-connected to the tour players. It is going to be a joy to follow along with his story. We are fortunate that he is not an especially private guy.

It should not be a surprise that Ian Pouter, the ostentatious Englishman, has a large social media presence. What primarily sets Pouter apart from other golfers though, is the way he has assimilated into the wealthy lifestyle. Poulter is big into style and luxury, and enjoys exhibiting the luxuries he has collected. His is especially passionate about high-end cars.

This is what the invitation box looks like for the La @ferrari Spider… Was a nice surprise a couple of months ago. pic.twitter.com/Fpwu5rRSMa

This is what the invitation box looks like for the La @ferrari Spider… Was a nice surprise a couple of months ago. pic.twitter.com/Fpwu5rRSMa

Just got a set of Go Jaks to move a couple of the cars into position. I have to say they are brilliant. Well worth the money.

It's taken 40 years to collect a few keys. Anything is possible if you put your mind to it. Never say never. And don't listen to people who try and knock you along the way. Just work hard and you will fulfill your dreams.

Just got a set of Go Jaks to move a couple of the cars into position. I have to say they are brilliant. Well worth the money.

Poulter seems to attract more trolls to his media than other golfers, likely as a product of what is perceived to some as showboating. He doesn’t back down from them either.

I actually have 4 majors, they are Aimee, Luke, Lilly & Joshua. I'm very happy thanks. https://t.co/5uSZ8BR5QP

Compared to many golfers, Johnston is a relative newcomer to the world of social media. He has gotten more exposure as of late, his popularity has skyrocketed. He is funny, charming, and extremely down-to-earth. People love to root for players who are relatable, and Beef fits that to a tee. His goofy demeanor has taken pro golf by storm. He has already developed a tremendous rapport with his fans, and will likely be a popular character for a long time.

He is more accessible than most athletes as he gives a lot of special attention to answering fan questions:

His love of meat has already become legendary:

Thank you @kenstewartsrestaurants for the tomahawk last night.

In terms of quantity, Bubba Watson is the emperor of social media. His 44,500+ tweets lap the rest of the field. In terms of quality… Bubba is still one of the best.

Bubba generated some headlines recently when he posted pictures he took of The Greenbrier’s badly flooded courses. He is a member of The Greenbrier’s exclusive Sporting Club and owns property on site. News had gotten around that floods were wreaking havoc on the idyllic region, but the public did not see just how serious the flooding was until Bubba’s pics started to surface.

Bubba is one of the most polarizing golfers on tour, but credit has to be given to him; nobody seems to put more effort into connecting with fans.

He is a fun follow, mostly because the stuff you see on his page, you will not find anywhere else. Whether it’s a jetpack, a hovercart, the General Lee, etc, he has unique tastes, to say the least:

You know your feet feel good with these 2 legends walking around!! #StanceLife pic.twitter.com/cZcS4nnUBW

Rory is another fantastic example of how the youth of the PGA is allowing the sport to thrive in Tiger’s absence. McIlroy is fun, exciting, and one of the most articulate players in the game, three attributes that stand out clearly when looking at his social media accounts.

He is a guy who knows how to have fun:

See you on the other side @xdubai

This is Rory getting in a group selfie shot:

Had a great time visiting the Autograph Zone at #TheOpen today! #KidsGoFree pic.twitter.com/v7zLMBi9Fa

After seeing all these snapchats over the last few days… Maybe I should have taken @RickieFowler up on the invite! pic.twitter.com/6vWoFV9LlU

Among the older guys on tour, Bjorn is one of the most active on social media. The Dane has a great sense of humor. He is clever and outspoken.

This is Bjorn saying something that we were all thinking:

Come on @BKoepka
62 and we don't have to listen to Johnny Miller anymore!!!@johnhuggan

Bjorn seems to have at least one enemy:

I hope the girl at check in meant gate D/E
???? pic.twitter.com/oC61tvGVnT

Ben Crane is one of the most unusual characters in all of sports, and that trait is well on display on his social media accounts.

Here he is showing off his photoshop abilities:

Taking a quick spin around the course at the @Zurich_Classic pic.twitter.com/jIG88TaYci

Crane with an acting/golf legend:

Got a picture with Carl Spackler today. So I got that going for me, which is nice. pic.twitter.com/W2SDZolZRp

Shaved my beard this week but tried to sell my wife on some new looks before it was gone. She didn't love them.

Crane had a good line after the Farmer’s Insurance Open:

100's of insurance agents at the course today so filing a claim should be breezy. pic.twitter.com/FTDn2RBdjM

Shane Lowry might be the wittiest guy on tour. The twitter page of the 29-year-old Irishman is full of his quick, laconic wisecracks.

Lowry poked some fun at himself after a poor first round at The Open Championship:

That was big for me there. I would have never been able to come back from 16 behind. #phil

He has interesting quips about other sports as well:

There won't be a cow milked in Leicester for weeks.

What a stunning backdrop on the 16th at the @emiratesgc here in Dubai. Great few days prepping for the @eurasiacup Excited to get to Malaysia and represent Europe.

Among the younger generation, Rickie Fowler is undoubtedly the king of social media. He is an engaging, fun-loving guy, and seems to always be posting something that has people thinking, “I wish I was him”. He is very well-connected on tour; it is funny how often he shows up in the pictures of other golfers. He also has the most active snapchat account of anyone on tour. His chronicle of sb2k16 was maybe the best golf-related anything that has been shared this year.

Here he is engaging his fans:

This is the kind of video that is frequently seen on his instagram.

No one on tour makes the fans feel closer to the action, and closer to what is behind-the-scenes than Fowler.

“The greatest ______ on tour is:_________” John Daly is the answer to more of these kind of questions than anyone. Even at 50 years old, Daly absolutely kills it on social media. He is one of the most popular players of all time for good reasons, not all which have to do with golf, and those reasons are showcased in a spectacular way on his social media pages.

John Daly is the only guy on tour who could get away with this:

I'm going to give myself a 2 John Daly cocktail penalty for just watching this tournament! ?#USOpen @GIASIbeverages pic.twitter.com/v9dHUsUCqe

If it were Jordan Spieth, we would all be lamenting in how far he fallen and what his life had come to. Since it’s John Daly, it’s awesome.

Showing off a poignant wit on this one:

The only thing that is not awesome about John Daly’s social media presence is knowing that twitter, instagram, etc weren’t around during the period of his life when his debachery would have been the most on display.