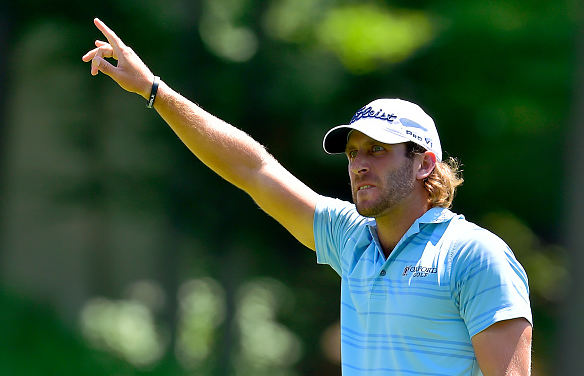 It has been a difficult past few months for Andrew Loupe. He looked poised for a breakthrough after the first round of the Wells Fargo Championship at Quail Hollow back in early May. He had an unbelievable round, shooting a 7-under 65 with seven birdies and no bogeys; hitting fairways and greens in a way we had not seen from him before.

Whatever Loupe lost after Quail Hollow seems to have finally been found at TPC River Highlands. The man who ranks a dismal 161st on tour in GIR hit nearly three-quarters of his greens today, and that led to a first round 6-under 64 at The Travelers Championship in Cromwell, Connecticut.

The three leaders got there in three different ways. Vaughn Taylor went on a back-nine birdie binge, with five in a row from holes 12-16. Taylor was the only one of the leaders without a bogey on the card. He is also the only one with a win this year (Pebble Beach). Jerry Kelly got there the same way as Taylor: with short, but accurate drives and catching fire on the back nine. Loupe’s game was diametrically opposite of Taylor and Kelly: he was much longer off the tees, averaging 316 yards on drives, which was good for fourth in the field.

All Eyes on the Olympians

Three of the four American Olympic representatives, Bubba Watson, Patrick Reed, and Matt Kuchar are all in the field at the Travelers. Not only that, but they are in the same group for the first two rounds. Of the three, Bubba was the best today, shooting a bogey-free 67. Watson, the defending champion and all-time earnings leader for the event is at T9. Kuchar, coming off a downright dreadful performance at the PGA Championship, struggled with a two-over front nine, but found his game on the back, with four birdies in on the way to a round of 1-under 69. Similar to Kuchar, Reed had some trouble navigating the front nine, but bounced back for a round of 70(E).

Another former champion is making moves. 2007 #TravelersChamp winner @HunterMahan is five-under through his past 4 pic.twitter.com/Ez98O5fldz

Hunter Mahan (-2), Stuart Appleby (-2) – Mahan is a former champion of this event, so in that regards his good round was not a surprise. However, Hunter Mahan of 2016 has been MUCH worse than what we have become used to seeing from him. Mahan has just one top-25 finish in 19 events this year, and has barely 200k in earnings. He has not been under $1.5 million in earning in ten years. He has plummeted all the way to 203rd in the world rankings, as every part of his game, save his putting, has been a disaster. A 2-under, which included two late bogeys is a promising showing. Appleby is currently sitting at 146 on the FedEx Cup standings, over twenty spots on the wrong side of the bubble. His putting was great today, as he searches for his first victory since 2010.

Brendan Grace (+1), Padraig Harrington (E) – For someone who finished in the top-5 at the last two majors, a one-over 71 that included only one birdie is inexcusable for Grace, the world’s 10th ranked golfer. A round of even par is not a bad result for Harrington considering the form he has shown the past few years, but he had been looking much better lately, with a T13 at the PGA Championship. Harrington is currently 129th in the FedEx Cup standings and needs to do better than even-par golf if he wants to get into the playoffs.

“I was feeling good, I was hitting good shots. The putter started feeling better and we get on a run sometimes and just ride it.” ~ Vaughn Taylor on his back nine birdie blitz