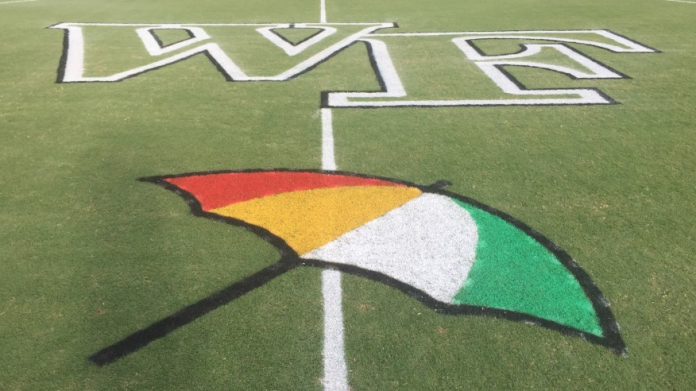 The Wake Forest Athletics Department announced its plans to honor the memory of one of its greatest alums, Arnold Palmer.

Palmer, who passed away on September 25 at the age of 87, played his college golf at Wake Forest, winning multiple Southern Conference, Atlantic Coast Conference and NCAA championships.

All competitive athletic fields, including those at BB&T Field, Spry Stadium, Kentner Stadium, David F. Couch Ballpark and the Joel Coliseum, will have Palmer’s distinctive multi-color umbrella logo on or near the playing surface. Other venues that will have the umbrella logo include the Wake Forest Tennis Complex, the Indoor Tennis Center, the Cliff Neal Throws Area and the Arnold Palmer Golf Complex.

According the the press release, “all Athletic teams will sport a logo honoring Palmer on all jerseys.” While the “football team will have a helmet sticker honoring Palmer.”

Additionally, “the football team will carry a flag bearing the umbrella logo when it takes the field for all remaining football games.”

A pre-game celebration to honor The King will take place when Wake Forest hosts Syracuse in football on Saturday, Oct. 8. Students, alumni and fans will be invited to sign a large banner that will be presented to the Palmer family at a later date.

We lost a legend today, but Arnold Palmer will always be in our hearts. Thank you for making Wake Forest a better place. pic.twitter.com/1l5WsSqUvI

The statement closed by noting Palmer “received much recognition on campus during his life with his statue at the “Arnold Palmer Golf Complex,” as well as the “Arnold Palmer Dormitory on campus.” Each year, “Wake Forest’s Male Student-Athlete of the Year is recognized with the Arnold Palmer Award.”