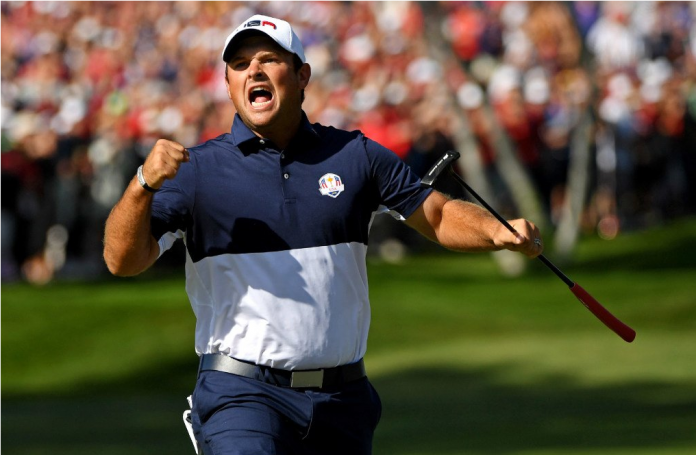 Patrick Reed was the star of the Ryder Cup matches. Without question. Reed went 3-1-1 in 5 matches at Hazeltine, highlighted by an epic showdown with Rory McIlroy.

The San Antonio native has been a star on the PGA Tour for a couple of years now, but beyond the core golf audience, not many sports fans knew much of Patrick Reed. But with millions watching on TV, and following on social media, Reed raised awareness of his brand name. Big time – thanks to his clutch performance and firebrand emotions.

Here’s a roundup of Reed’s best reactions on the course, along with some quotes about the new “Captain America.”

“Patrick took a lot away from Tiger’s demeanor, and his intimidation the way Tiger had an air about him. …He wanted to show people that he wouldn’t back down.”
–Peter Murphy, Reed’s swing doctor

“Patrick has a lot of built-up emotion and this is the time that he can really let it out and just have fun. The Ryder Cup is fun for him. He loves to compete. This is when he can really let out his personality and character.”
–Justine Reed, wife of Patrick Reed

The Tiger Woods of the Ryder Cup

“Make no mistake: Patrick Reed will never be Tiger Woods, not by five country miles. But Reed has already become the Tiger Woods of the Ryder Cup, and that’s really bad news for the international golfers who’d grown accustomed to sinking the Americans on both sides of the pond.”
–Ian O’Connor, ESPN Sports Writer

The bow.
The finger wag.
The answer.

Built For the Ryder Cup

Patrick Reed is fired up!

“Reed is a full-bodied American — all of the good and all of the bad. He acts like the damn alpha in a twosome with someone who will probably be known one day as the greatest European of all time.”
–Kyle Porter, CBS Golf Writer

“Reed gave Love what he needed, beating McIlroy, 1-up, in a match that sometimes felt closer to M.M.A. than to PGA. But then Reed, a 26-year-old from San Antonio, comes from a generation raised on demonstrative sports stars, and on wide receivers signaling first down after a catch.”
–Christopher Clarey, NY Times Sports Writer

Patrick Reed's eagle is so damn beautiful. Club twirl and all. #USA pic.twitter.com/ZIvQg8dhmm

“He’s Captain America. He wanted to play all five matches. Tiger told him he might be sitting one, and said, ‘you’re not sitting me in any matches’.”
–Jordan Spieth, Reed’s playing partner

That roar from the crowd courtesy of Patrick Reed! #GoUSA https://t.co/uJTU8B3cY2

Animal Out Of a Cage

“He’s more comfortable now being who he is, even compared to just a couple of years ago. He’s let the animal out of the cage.”
–Kessler Karain, Reed’s caddie and brother-in-law