The top LPGA players from the United States and Europe will tee it up this week at Des Moines Golf and Country Club for the 15th edition of the Solheim Cup.

Team USA enters the match-play tournament with a chance to win consecutive Solheim Cups for the first time since 2007 and 2009.

The United States leads Europe 9-5 all-time in the biennal series, following their historic comeback win in 2015 at St. Leon-Rot Golf Club in Germany.

The event is named after the Karsten Solheim, the golf equipment manufacturer, and founder of PING Golf, who was the brainchild of the event.

The Norwegian immigrant was working as an engineer at General Electric when he took up golf at the age of 42 and brought science to the game, coming up with the idea of perimeter weighting, first with the putter then with irons, eventually establishing the revolutionary equipment company PING. 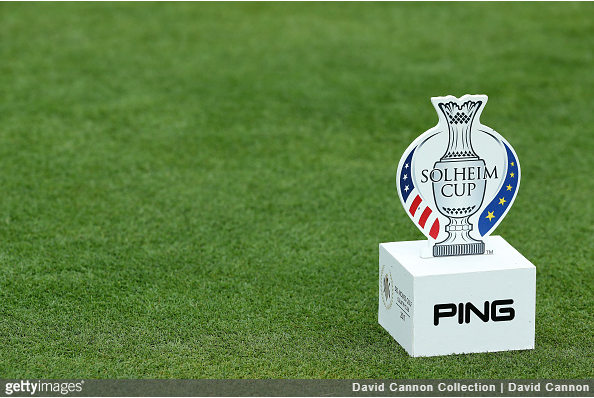 A staunch supporter of women’s golf and the LPGA, Solheim saw the rise in popularity of the Ryder Cup after Europe ended America’s long domination with victories in 1985 and ’87 and a halve in 1989. In 1990, he put his name and his money behind the women’s version of the Ryder Cup. The first competition was thrown together in less than six months, and held at Lake Nona Golf & Country Club with no TV coverage, and sparse galleries.

The inaugural U.S. team was captained by Kathy Whitworth, leader in career LPGA victories (88). The American team was comprised of five future Hall of Fame members: Betsy King, Nancy Lopez, Pat Bradley, Beth Daniel, and Patty Sheehan — each of whom would go on to captain an American Solheim Cup team. The U.S. won in a blowout, 11.5 to 4.5.

The Solheim Cup started out during even number years (1990), so as not to compete with the Ryder Cup which was played in odd number years. But following the 9/11 attacks, the 2001 Ryder Cup was postponed to 2002, and so the women’s competition switched to odd numbered years in 2003. 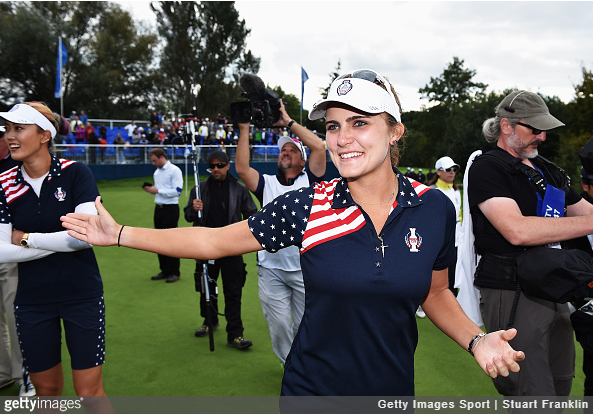 The Americans trailed 10-6 heading into Sunday’s singles matches but overcame the largest deficit in the event’s history, racking up 8.5 points in the final matches to edge Europe 14.5 – 13.5.

The 2017 Solheim Cup features two of the highest profile captains in tournament history: LPGA and World Golf Hall of Famers Juli Inkster and Annika Sorenstam. The pair combined for 103 LPGA wins, including 17 major championship titles, along with 17 Solheim Cup appearances as players. 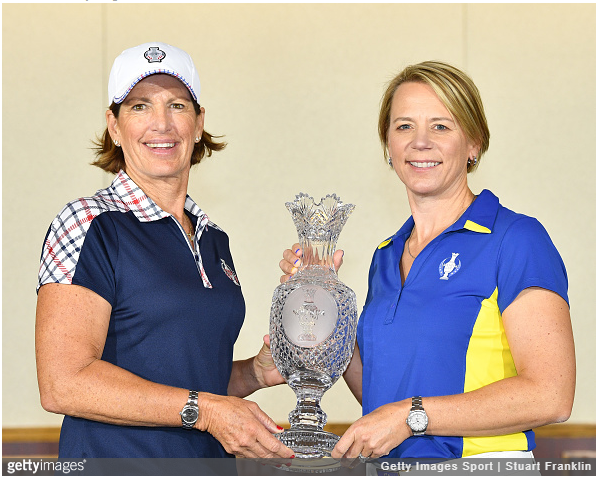 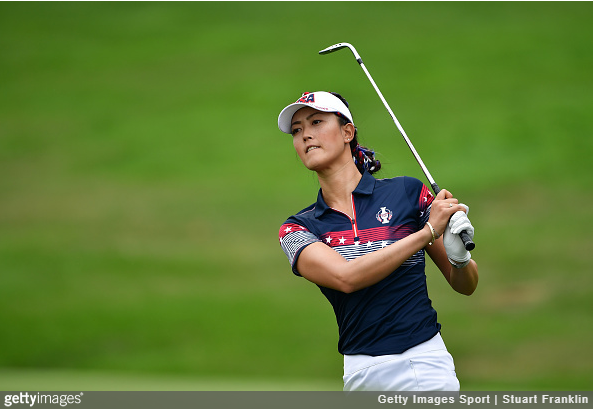 The European squad doesn’t have quite as much experience, with four players on the team making their third Solheim Cup start alongside longer tenured players in Suzann Pettersen (nine), Anna Nordqvist (five) and Karine Icher (four).

The Americans have 36 Solheim Cup starts under their collective belts while the Europeans have just 24.

Conversely, the combined record for the Americans players is slightly below .500 at 57-60-23, while the European roster has an impressive combined record of 47-32-13 for a .581 winning percentage.

So while the Americans may appear to be the favorites on paper with 65 combined LPGA wins to the European’s 26, that has not necessarily translated to success in the match-play format of the Solheim Cup.

Most notably, the Americans are 6-1 in the biennial competition when it has been played on American soil, with their only loss coming in the last appearance in the United States at Colorado Golf Club in Parker, Colo. This is the first time that the Americans will attempt to defend the Cup since 2011.

BY THE NUMBERS: TEAM USA

BY THE NUMBERS: TEAM EUROPE

It probably doesn’t help perception when nearly one-third of this week’s Solheim Cup participants are first-timers. 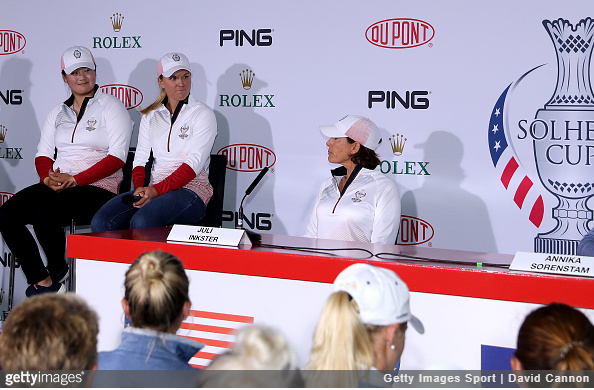 U.S. captain Juli Inkster has three rookies, including 18-year-old Angel Yin, who she made a captain’s pick after the California teen finished in a tie for 11th at the Women’s British Open. It was her third top-15 finish in her past four starts, and she was a quarterfinalist at the Lorena Ochoa Match Play.

Inkster’s other newcomers are Danielle Kang, who won the Women’s PGA Championship in June, and Austin Ernst.

Everyone knew it was only a matter of time before Annika Sorenstam was called into Europe’s Solheim Cup captaincy, and it’s no surprise that she’ll make her debut on the U.S. side of the Atlantic. 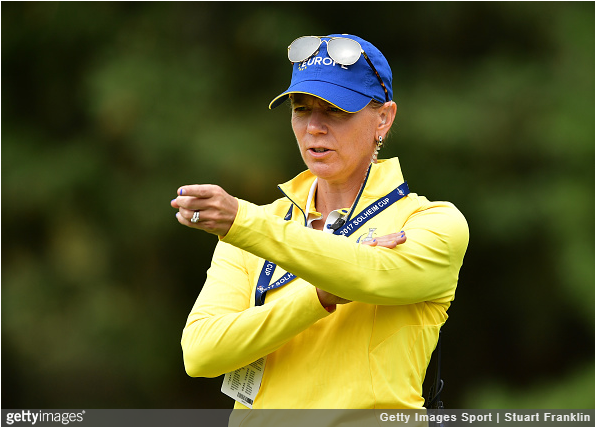 One can’t help but wonder, though, if Captain Annika could use a little bit of Annika the world-beater. Or a lot.

Sorenstam’s squad features just one player in the top 20 of the world rankings – fellow Swede Anna Nordqvist, who’s recovering from mononucleosis. Spain’s Carlota Ciganda and Denmark’s Suzann Pettersen are the only others in the top 25.

As mentioned above, her top qualifier from the LET points list is a 21-year-old rookie. Three of her players stand outside the top 75 in the world rankings. Former stalwarts Azahara Munoz, Sandra Gal and Catriona Mathew didn’t qualify.

Paula Creamer hasn’t missed a Solheim Cup since her 2005 debut, though she came awful close to doing so this summer. 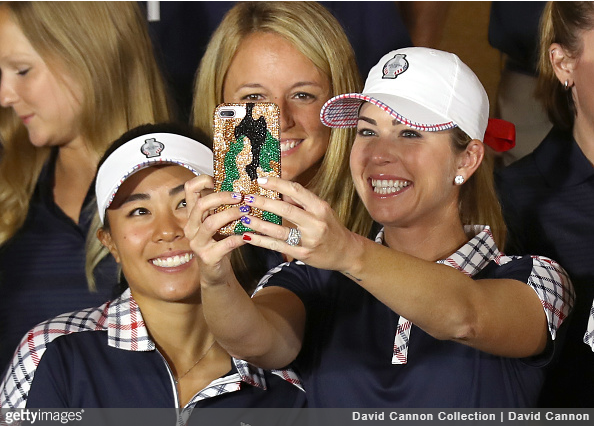 The Pink Panther was left off the original U.S. roster, then added as an injury replacement for Jessica Korda. Now the question is how Inkster will utilize a veteran who has just one top-10 finish this season and is down to 122nd in the world rankings.

The good news is that Creamer’s game has been on an uptick, with top-16 finishes at both the Ladies’ Scottish Open and Women’s British Open. But her real value might be as a team-builder in the backroom, perhaps only playing one session before Sunday singles.