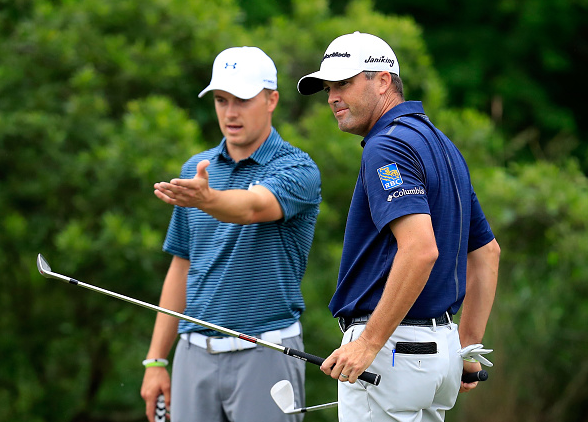 The top teams met with the media after round one of the Zurich Classic at TPC Louisiana. Here’s a round up of some of the quotes via ASAP Sports.

QUESTION: I heard you guys have plans for tonight; is that true?

RYAN PALMER: Yeah, we’re going to head over and help the team in the war room in the Saints’ facility get their first pick in there, so we’re going to hang out at the facility with Coach Payton and their crew and watch the draft with them.

QUESTION: Jordan, are you going offense or defense?

JORDAN SPIETH: I’m going Dallas Cowboys, but it was fun, it was great of Coach to offer. Ryan is close with Coach Payton, and it’ll be really cool just kind of sitting in the back and watching that process take shape. I’ve always wondered what it’s like.

QUESTION: Do you guys use the same kind of golf ball, and what kind of strategy did you use with that?

JASON DAY: We used Rickie’s ball today. I think my ball spins a little bit more, and I just felt like coming into a situation where it can be a little breezy this week, I think playing his best with less spin, for him to change to my ball would have been a pretty drastic move, especially trying to keep it down. With his ball, it’s obviously easier to keep it down, and I think it was an easy transition for me to go from my ball to his ball in this team format.

JASON DAY: Yeah, we’re splitting hairs here, but that’s the kind of decision we made at the end of the day.

Hoffman On the Stress-Free Round

QUESTION: How much different was today than a normal grind of a regular TOUR event?

CHARLEY HOFFMAN: I didn’t really feel much grind out there at all. I enjoyed — when I wasn’t hitting the tee shot, walking up the fairway, and then if you did hit a tee shot, just go up to the green and have a putt for birdie. I think it was very low stress for the most part. We both hit a lot of good quality shots out there, and it was nice to see a few putts go in, which obviously left us somewhat near the lead.

IAN POULTER: Well, we didn’t know what to expect, either, because last week we was told it was modified foursomes, and then it was only yesterday we was told it was actually real foursomes. But I actually think it played nicely today. There was a couple of holes out there where you have to be careful, and we did that very well. Geoff holed a lovely putt from about 27 feet on the last, which was probably — it was nice to do that because we hadn’t holed a lot of putts during the day, during the morning, but we hit a lot of good golf shots, had a lot of good looks at birdie, and 3-under par is probably a fair reflection of obviously how we’ve played.

Crane and Martin on How They Were Paired

QUESTION: How did this pairing come about?

BEN MARTIN: We saw each other in Jackson last fall, and Crane being a Zurich guy kind of knew what was going to happen, so he just mentioned to me, hey, you want to pair up, and I said, sure. Got a lot of prep in.

BEN CRANE: Yeah, we played zero practice rounds together, but we were like nervous starting out. I’m like, man, I don’t want to hit a bad — I don’t mind if you put me in a bad place, but I don’t want to hit a bad shot for you. He’s like, oh, I feel the same way. We started just relaxing. It’s actually kind of nice to take a shot off and you kind of just wander over to the side and let your pro hit you out there in the middle. It was a fun day. It was much more relaxing, I thought, and we had a ball.