The World Series of Golf. A furious Jack Nicklaus comeback at the 1975 PGA Tour. EIGHT Tiger Woods’ victories. And the last Tiger triumph before he stopped being Tiger.

Those are just some of the highlights that will define the history of Firestone Country Club, which this week, will serve its purpose as a World Golf Championships (WGC) event for the last time.

Largely due to sponsorship issues, the course that put Akron, Ohio on the map long before LeBron James and Stephen Curry, will be graduating (or retiring) to a Champions Tour event starting next year.

Until then, Firestone has one more story to tell as far as the PGA Tour is concerned, and that will be written over the weekend at an event boasting all 50 golfers in the top 50 of the Official World Golf Rankings.

Here is what we are looking at a little more closely this week:

1. TIGER WOODS (FINALLY) IN THE FIELD

Pro Golf Weekly is not one to subscribe to conspiracy theories, but if Jordan Spieth was not 100% class and a paragon of golf etiquette, we might think he had been corrupted at the Open Championship.

With a bogey on the 17th hole at Carnoustie, which occurred after he had essentially played himself out of an event that could have been his fourth career major victory, a ripple effect transpired that got Tiger Woods into the WGC-Bridgestone Invitational by the skin of his teeth, and probably just increased TV viewership of the event 60-fold.

One could argue that it is ridiculous that Tiger had not already qualified anyway; he has won this event an unreal EIGHT times. He won the first three, and on three occasions prevailed by seven or more strokes. Whatever happens to Firestone going forward, it will always stand as a memorial to peak Tiger Woods – one of the most dominant players in the history of professional sports.

Even though Tiger just barely qualified for the WGC event he has consistently obliterated, the field would be justified in being scared of him, and not just because the event has been his playground, but also because he has looked really good as of late.

We do not know if peak Tiger is ever coming back, but what we saw at The Open Championship might have been the closest we have seen since he won at Firestone in 2013. For ten holes on Sunday at Carnoustie, Tiger looked like the most capable player in the elite field. He looked uncomfortable with the lead once he got it, and a poor stretch on Nos. 11 and 12 dug a hole too deep to completely emerge from, but the T6 finish still put the Tour on notice.

Nobody will be overlooking the 79-time PGA Tour winner this week.

2. WHO CAN STOP MOLINARI?

With Tiger Woods, Phil Mickelson, and Dustin Johnson all being placed in the same group this week, Champion Golfer of the Year Francesco Molinari is unlikely to get excessive attention on Thursday and Friday, but he is probably the golfer the field should be most concerned about.

The man who somehow went bogey-free over the weekend at Carnoustie now has three victories, and two runner-ups in his last six events. Golfers do not get much hotter than that.

For a premier shotmaker, Molinari has a pretty poor record at the WGC-Bridgestone, with a T15 in 2011 being his only top-20 in seven tries at the limited-field event. That being said, the 35-year-old has transcended to a new level in his game, and those discounting him based on his Firestone past are just seeing what they want to see.

A player with Molinari’s current tee-to-green game, which ranks second on the PGA Tour, is unlikely to find much trouble anywhere.

It is not unusual for to see a considerable letdown after a golfer captures his breakthrough major, but with another major coming up in just a week, Molinari cannot afford to get complacent. He will want to keep his whole arsenal hot when he competes at a PGA Tour where he finished runner-up just one year ago.

In last week’s storylines, we expressed how shocking it was that defending Open Champion Jordan Spieth had not won since the victory he was defending. That may go double for Hideki Matsuyama, this week’s defending champion at the WGC-Bridgestone Invitational. 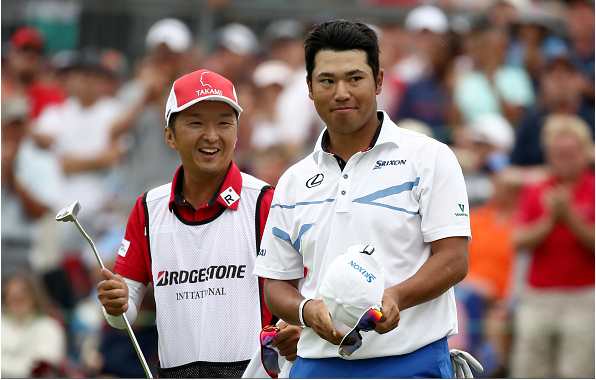 Matsuyama’s scorching Sunday 9-under 61 to blow away the field at Firestone one year ago was very possibly the greatest round in WGC history. It broke the record for lowest final round in a WGC by three strokes, and was the epitome of a shotmaking clinic. Hole after hole, the 25-year-old Japanese star would knock an approach shot close to the hole, and need just one putt to finish.

It was one of the most “can you believe what we are seeing” kind of rounds in recent history.

The Firestone triumph was Hideki’s third win of the season, fifth of his PGA Tour career, and 14th of his professional golf career; a heck of a resume for a man in his mid-20s, from a country without much of a notable golf resume.

Surprisingly, he has not won again since. In fact, he has not as much as seriously contended in a tournament since finishing T5 at last year’s PGA Championship, where he got off to a hot start and tripped on the weekend.

Some of Matsuyama’s troubles can be imputed to a nagging wrist injury. There was additional credence to that theory when he hit a T16-T13-T16 stretch in May-June, but just as it appeared he was healthy and near his top form again, his last two events happened: a missed cut at the European Tour’s Scottish Open followed by a missed cut at The Open Championship.

The biggest drop in Hideki’s game has been with his approaches. Typically pristine, Matsuyama finished the PGA Tour season ranked in the top 10 each of the past four years in strokes gained: approach-the-green.

This year, he ranks a disappointing 75th in that same stat, and is 194th in proximity to the hole. Statistically, he has actually improved considerably on the greens, but he spends too much time too far from the hole to see improved results from it.

Speaking of Spieth, the three-time major winner will be making his first post-Open Championship start this week at the WGC-Bridgestone. At Carnoustie, the 25-year-old former World No. 1 and former PGA Tour Player of the Year, appeared to have busted from a puzzling slump when took a 54-hole co-lead in the season’s third major, a major where he was the defending champion.

Unfortunately for Spieth and his many, many fans, Sunday at The Open was not the shotmaking showcase of the previous year, but instead was a dismal display. Spieth failed to produce a single birdie in a 4-over 76 that dropped him into 9th place.

It would be easy to get further down on Spieth, who had four missed cuts and no top-20s in his previous seven starts, but the now No. 8 in the World was upbeat after his final round, saying he was encouraged by his performance with his putter, the main culprit in his surprising slump.

Spieth has yet to notch his first WGC victory, but the 10-time PGA Tour winner has played better at the Bridgestone than the other WGC events. He was a career WGC-best T3 in 2016, one year after a T10. He placed T13 in last year’s edition.

In just under two months, the 2018 Ryder Cup will tee off at Le Golf National in Paris, France. There are hundreds of players on Tour who would kill to be a part of that 12-man team, but opportunities to represent Team America are running out.

This week’s WGC-Bridgestone Invitational will be the penultimate event of the year awarding Ryder Cup points. Those who still have more work to make up upon leaving Akron will need to impress at next week’s PGA Championship. At that point, the top 8 in the American Ryder Cup standings will automatically be named to the team.

Those who do not make the team automatically are not quite done, but to snag one of the remaining four spots, anyone else will need to impress American captain Jim Furyk, who will be making three wildcard picks (termed “Captain’s selections) after the Dell Technologies Championship, the second round of the FedExCup Playoffs, and the final pick after the following week’s BMW Championship.

In the current Ryder Cup Standings, Brooks Koekpa, Dustin Johnson, and Patrick Reed have mathematically clinched spots on the American team. Justin Thomas is basically a lock as well, while Bubba Watson and Jordan Spieth would need something drastic to happen to miss out. It gets interesting after that, however. Here is the current bubble:

IN AND MOSTLY IN

Jim Furyk is going to have some tough decisions after the top 8 are locked in following the PGA Championship. There is potential for a lot of movement at Firestone.