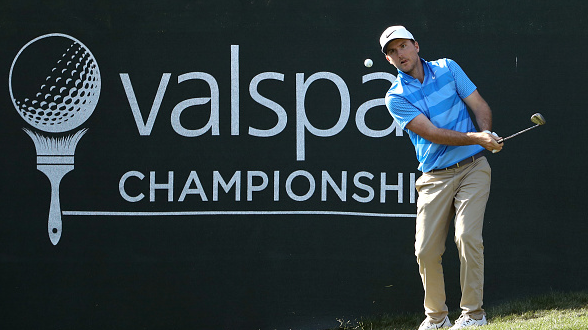 Adam Hadwin leads the Valspar Championship through 54 holes, and is on pace to pick up his first PGA Tour win. The 29-year-old Canadian is 4 shots ahead of Patrick Cantlay, who will play with Hadwin in Sunday’s final pairing at Innisbrook.

2. Keegan Bradley looked like a sleeper pick after a terrific opening round 67 which landed him at T6. But the former PGA champ followed it up with a 2-over 73 on Friday, and then totally collapsed yesterday with a 4-over 75. Bradley has dropped all the way down to T54 at +2. After a strong start to the season, Bradley has struggled the past month or so.

3. J.J. Henry has gone the opposite way of fellow New Englander Bradley. The 41-year-old Henry opened with a 1-over 72 and needed a good score on Friday just to make the weekend. He did just that. And after back-to-back 67s, Henry finds himself at -7, tied for fifth. Henry, who is a missed-cut machine, is looking for his first decent payday of the season.

4. Tyrone Van Aswegen was in great shape to make a run at his first PGA Tour title heading into Saturday’s third round. Following two impressive rounds of 69 and 65, the 25-year-old South African was at -8 and only two shots back of leader Hadwin. But Saturday’s 4-over 75 completely knocked him out of contention.

5. Russell Henley, like Van Aswegen, was in superb shape after 36 holes (-7 and only 3 shots back). But a 4-over 75 also knocked the two-time Tour winner out of contention. Henley will be battling for a top-10 finish on Sunday which will move him into the top-50 in the FedEx Cup race. He’s currently at 64.