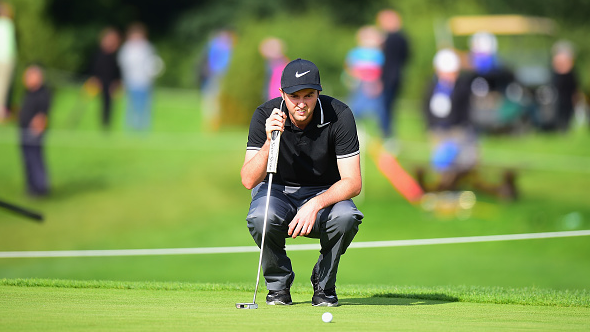 England’s Ashley Chesters posted a bogey-free 67 at Green Eagle Golf Course to grab the clubhouse lead in the weather-suspended round two of the Porsche European Open.

Chesters posted four birdies over his first 13 holes, before play was suspended due to downpours. After the four-hour rain delay, the Englishman went 1-under over his final five holes to get to 9-under.

“I didn’t even realize I had gone bogey free today, it didn’t really come into my head on the way around so, it’s always nice to keep the bogeys off the card – it’s the easiest way to get a good score,” commented Chesters.

One back of the lead, at 8-under, is Bangladesh’s Siddikur Rahman, who also completed his second 18. He is tied with three others including first round co-leader Richard McEvoy, Stuart Manley and defending champion Alex Levy – all of whom were still out on course when play was suspended.

“I holed many long putts today and that’s why I played so good and managed to make a better score,” said the 32-year-old Rahman.

Reigning PGA champion Jimmy Walker posted a 4-under 68 and moved 55 spots up the leaderboard into the top 25. Fellow Americans Patrick Reed, Pat Perez, and Chase Koepka all had late tee times, and failed to even get off. The trio will play 36 holes on Saturday.