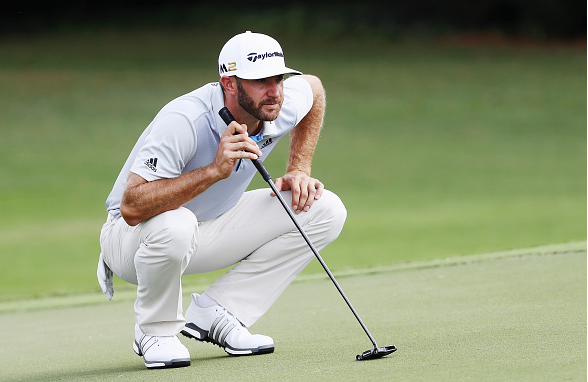 The final round of the final event of the FedEx Cup Playoffs is underway, and the thirty golfers who have not been eliminated are engaged in a battle royale for both the tournament ($1.53 million winning share) and the FedEx Cup ($10 million for winning), a whopping combined prize of $11.53 million!

Going into round one, Dustin Johnson stood atop the standings. After round one? Same story. DJ shot a four-under 66, and is tied with Hideki Matsuyama and Kevin Chappell for the lead.

The trio of DJ, Matsuyama, and Chappell combined for just three bogeys. DJ birdied the first and the last, and played two-under in between. He was second in the field in both shots gained: approach the green and shots gained: tee to green. A bit of a surprise though: he was just 22nd out of 30 in driving distance, a stat he leads the Tour in.

Matsuyama had an up-and-down front nine with four birdies and two bogeys, but was consistently good down the stretch, and came in with the same 2-under he went out on. Chappell was bogey-free on the day, with all four of his birdies coming on the front nine.

Both Rory McIlroy and Jordan Spieth commented after their rounds that there was a point where their rounds could have easily gotten away from them. Fortunately, both rebounded, and they are currently tied for 7th, just two strokes back. Rory had back-to-back double bogeys on 8 and 9, but had birdie streaks of both three and four in a row.

Spieth, the defending champion of both the tournament and the Cup, got off to an awful start: bogey, double-bogey, but righted the ship quickly with three birdies in his next four holes. Rory won the Deutsche Bank a few weeks back with similar hot streaks. He is 6th in the FedEx Cup standings, and wins the Cup if he wins and DJ finishes worse than solo-2nd. Spieth, was not especially long or accurate in round one, but he was fantastic on the greens, finishing second in the field in strokes gained: putting.

Not As Good As Expected

There were a dozen players under par after their first round, but a high number of disappointments as well. Patrick Reed, who won The Barclays, the first round of the playoffs, bogeyed four of five holes mid-round, and is currently 3-over.

Phil Mickelson made some waves by sinking a 94-foot putt on the first hole, but had his round torpedoed by a bogey, triple-bogey, double-bogey stretch from holes 6-8. He finished his round at four-over, leading only two other players in the field (McGirt, Na). PGA Champion Jimmy Walker has been feast or famine lately, producing the latter today, tying Mickelson at +4.

With 11 of the 12 spots on the American Ryder Cup team are spoken for, the last spot will be a Captain’s Pick, announced by Captain Davis Love III after this tournament. Among those he is believed to be looking at Justin Thomas had the best round with a two-under 68.

Most of the others struggled today, most notably Ryan Moore (E), Bubba Watson (+2), and Daniel Berger (+4). Jim Furyk is expected to be in the mix as well, even though he did not qualify for the Tour Championship.

“Stay patient. Rory started that way at Deutsche Bank this year just a few weeks ago, and ended up winning the tournament so I think he might have been three over through four. So, stay patient, this is a golf course where I feel comfortable on the greens, very comfortable in general, I feel comfortable on this type of grass, I made a couple long putts on the next two holes to settle me down, and it got us even by the turn. I’m obviously very pleased because that could have gone south quickly”
–Jordan Spieth on what he told himself after his poor start.