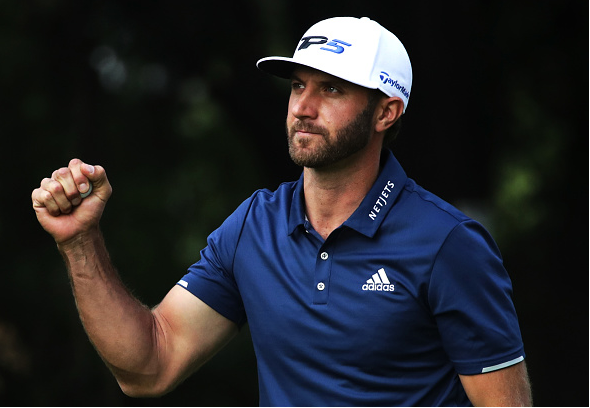 It took all of one start for Dustin Johnson to validate his No. 1 new world ranking.

Holding off a furious second-nine rally from Spanish wunderkind Jon Rahm, and some late round heroics from little-known European Tommy Fleetwood, Johnson rode a 4-under front nine to a 3-under 68, and a one-stroke victory at the WGC-Mexico Championship in Mexico City, his very first tournament as a world No. 1.

Johnson briefly lost a significant lead on the back nine, but collected himself to capture his second tournament title of the year, his second in his last two starts, and his fourth all-time World Golf Championship Crown.

How Dustin Johnson Did It

DJ started the day one stroke behind three-time season winner Justin Thomas, and had a tough task, playing in the final pairing with Thomas and Rory McIlroy, who was making his first start after a rib injury forced an extended absence.

Johnson took control early with a birdie on No. 2, and then three more on Nos. 6, 8, and 9, and with over-par front nines for both Thomas and McIlroy, Johnson looked like he was going to cruise to a second straight win.

Then, out of seemingly nowhere, Jon Rahm went on a back-nine tear, and after Johnson bogeyed 12 and 13, Rahm stood on the 16th tee box with a one-stroke lead. Rahm bogeyed the next two, and fell into a tie for third place. Meanwhile, a brilliant shot out of a fairway bunker on #18 lead to a tap-in par and a one-shot victory over Fleetwood.

What It Means For Johnson

It means that Dustin Johnson isn’t going anywhere, especially in the world rankings, where he looked more than comfortable holding the top spot.

His back-to-back early season wins are coming off a three-win season where he was named PGA Tour Player of the Year, and he is starting to look unstoppable in his defense.

It’s the 14th career victory for the 32-year-old, and 4th in a WGC event, which is second all time after Tiger Woods’ 18. That record might not be attainable, but nothing else looks off-limits the way Johnson has been playing over the past year.

Ross Fisher had “future major winner” written all over him when he contended in two 2009 majors (the U.S. Open and Open Championship), but had basically fallen off the world map since. He recently started playing well enough in Europe again to qualify for WGC-type events, and a T3 highlighted by nine final round birdies is a huge win for him.

Tommy Fleetwood is a big name on the European Tour, but he has played sparingly on the PGA. After a solo-second where he was -4 on the back nine on Sunday, capped off by a 40-foot birdie putt on 18, his name is starting to gain traction on this side of the Atlantic too.

Rory isn’t exactly jumping for joy after a final round 71 that included just two birdies, but a T7 finish for his first action since early January is a promising result for the world #3.

Lee Westwood has developed an unfortunate habit of bombing his big-stage Sundays in spectacular fashion, and Mexico was no different. After reaching as high as third place, Westwood absolutely collapsed on the latter part of the front nine, carding double-bogeys on #6, #7, and #9, another double-bogey on #11, and then three more bogeys down the stretch for a tumultuous final-round seven-over 78.

Defending champion Adam Scott did well on the weekend with back-to-back 68s, but was so terrible over the first two days that he still finished over-par for the week.

Patrick Reed is officially in a slump after finishing +6 for the week, his fourth tournament in a row where he finished outside the top 20, with three of those finishes at T59 or worse.

“It means a lot. Obviously, it’s a tough spot to be in, there’s a lot of pressures on you, and I came out and played really well. I thought I hit the ball great all week. You know, the greens are tough to putt on; I don’t feel I putted my best, but I really hit the ball well, and I played just well enough I guess, because I won by one.”
–Dustin Johnson, WGC-Mexico Champion