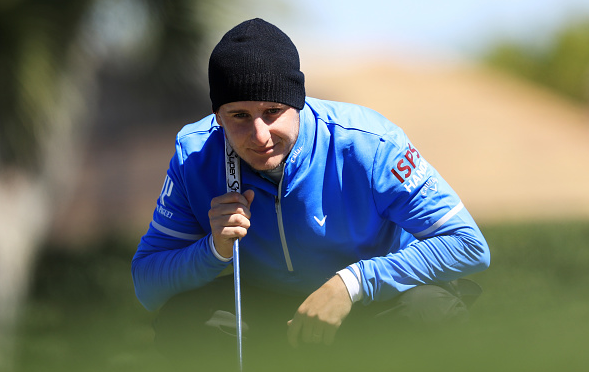 It was a very un-Floridalike morning at Bay Hill in Orlando; temperatures dropped into the 30s, and as a result, the first wave at the Arnold Palmer Invitational was demonstrably worse than those who were fortunate to tee off in the afternoon.

In the first Arnold Palmer Invitational, sans Arnold Palmer, the leaderboard basically contained one morning player: reigning PGA rookie of the year Emiliano Grillo, while everyone within two strokes of that lead teed off in the afternoon.

One round in at what is likely to be among the most emotional tournaments of the year, Grillo and young Englishman Matthew Fitzpatrick hold the early lead after shooting five-under 67s, one stroke ahead of the trio of Lucas Glover, Paul Casey, and Charley Hoffman.

How The Leaders Did It

Early on, Emiliano Grillo struggled like most of the morning wave, dropping to +2 through four holes. Once he warmed up, however, he was unstoppable with seven birdies in his last 14 to get to -5 for the day.

Fitzpatrick, who is one of the best in Europe, but has played very little stateside, had one of the rare bogey-free rounds at Bay Hill, with five birdies (all five in a nine-hole stretch midround) to post his 67.

Trevor Immelman has not been relevant on Tour since the second Bush administration, so posting a two-under 67 is an incredible round for him.

Injuries have reduced the 2008 Masters winner to a shadow of former himself, but today he was able to balance out four bogeys with four birdies, and an eagle on the par-5 sixth hole allowed him to post in red numbers. This tournament marks his 2017 PGA debut, coming off a season where he made just two cuts in 11 events, with a high finish of T62.

Relatively unknown 18-year-old Ryan Ruffels turned a four-under front nine into a round of three-under 68, which currently has him in the top 10. This is just Ruffels 9th career PGA Tour start. His previous best finish was a T20 at the rain-shortened 2016 Zurich Classic.

Matt Every’s career has been an absolute nightmare since he won the Arnold Palmer Invitational in both 2014 and 2015. It has now been over a year since he last played on a Sunday, but something just clicks for him at Bay Hill. He shot a very respectable one-over 73 that included just two bogeys.

World #3 Rory McIlroy was maybe the biggest name that entered this tournament, and was easily among the favorites, but after a disappointing 2-over 74, he’s not even beating John Daly, who is also at +2 after one round. A bogey-double bogey stretch on 10 and 11 marred an otherwise solid round for Rory.

Despite six birdies on the day, fan favorite Rickie Fowler matched McIlroy’s 2-over 74. Fowler had two double-bogeys in his opening round.

England’s Tommy Fleetwood took runner-up honors two weeks ago at the WGC-Mexico Championship, but after a terrible six-over 78 which included just one birdie, Fleetwood looks like a longshot to even make the cut.

“It was very tough. It was very cold this morning, it was almost freezing temperature out there; I couldn’t feel my fingers on the first 5-6 holes. A couple of mistakes there from the middle of the fairway on 3 and 4 that would have made it an even better round, but I’m really happy with the way I played after that, I was able to turn it around.”
–Emiliano Grillo, first round co-leader