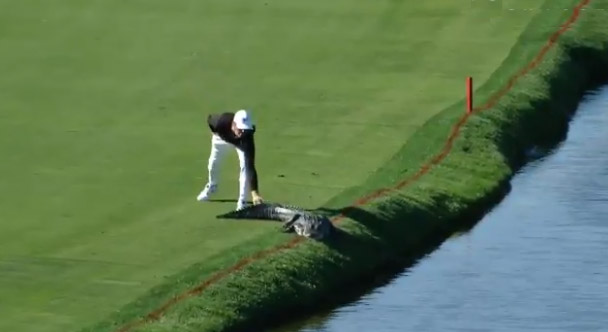 Yesterday, playing in the opening round of the Arnold Palmer Invitational, Cody Gribble noticed an alligator hanging out by the side the sixth fairway at Bay Hill. Gribble, who grew up in Texas, and apparently knows a thing or two about gators, gave it a quick flick on its tail to move it along.

The video went viral, and was broadcast across the world.

After today’s round, Gribble commented on the viral video, and his experience with gators. Here’s a few of the comments that stood out.

On why he did it.
The Gator “looked like he needed some exercise.” Plus he was struggling somewhat and needed to “get some adrenaline going.”

Was he afraid that it’d turn back at him.
He said, “I wasn’t really afraid about it (turning around).”

On if he’s ever done anything like this before.
He grew up in Texas, and he’s “done it a couple times before.” And if you think he’s “crazy, you should meet” his “father, Bill Gribble.”

Has he ever had one turn around on him.
“Uh, yeah. Yeah, I have. But they haven’t gotten me. I mean they’re quick. But they’re not that quick. I mean we’ve caught em before. I’ve caught some before (when) fishing… so I mean… It’s fun I like ’em. I mean I’m not going to hurt ’em or anything. They’re beautiful. And actually, I don’t know if you’ve ever felt an alligator before. They’re skin is incredibly clean. I don’t know (laughing)… You can feel my boots next week.”

Someone's waiting for you. pic.twitter.com/XqvEi9HaX8

As a follow up, the gator returned to the same hole and same spot. But this time he was staring down the fairway. As David Feherty says in this clip, “Cody Gribble, of Texas, went mental yesterday…”

Gribble missed the cut, but received a nice parting gift from the Saunders family.

Nice surprise in my locker today after my round! Thanks Sam & Mr. Saunders…great time at Bay Hill. Awesome fans, hope to see ya next year. pic.twitter.com/UVAFTFp6kf