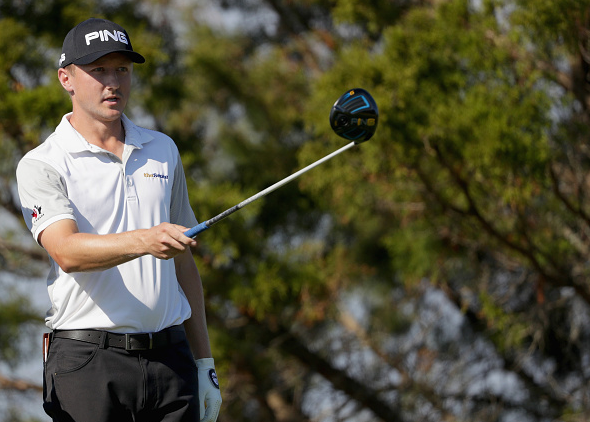 To many, the mark of a great golfer is the ability to bounce back from adversity. Through two rounds at the RSM Classic, little-known Canadian golfer Mackenzie Hughes had not faced much. He was the leader after 18 and 36 holes, and was in cruise control, with no bogeys on his card.

In just his ninth career PGA Tour event, there was reason to be skeptical of whether Hughes could keep it going, and he played his first ten holes as flawlessly as he played his first two rounds. Then Hughes finally had the hole that his competitors were waiting for: a triple-bogey 7 on 11.

Hughes had fallen out of the lead for the first time in the tournament, and with so little experience, he could have easily fallen back into obscurity, but he got his head back together and calmly birdied 13, 14, and 16.

Now, for the third consecutive round, Hughes is alone in first, one stroke ahead of Billy Horschel, Cheng Tsung Pan, and the fast charging Camilo Villegas, who is desperate to get his game back.

Hughes has been phenomenal all week, shooting par or better on 53 of his first 54 holes. The triple-bogey on 11 is his only blemish of the week, and he was able to bounce back with three birdies down the stretch.

He was not nearly as accurate as he was during his first two rounds when he hit all 26 of 28 fairways, but even after 9/14 fairways in round 3, he is still at 83.33% for the week, which ranks sixth in the field.

Hoping to Re-Capture the Magic

The last two years have been brutal for Colombia’s Camilo Villegas, as the four-time Tour winner has not finished in the top 10 since 2014. He even had to pass up representing his country at The Olympics in Rio because he needed to secure his Tour card.

Villegas has been making his presence known during the fall series, making early leaderboard appearances at the Sanderson Farms Championship (finished T26) and the OHL Classic (finished T28), but was unable to keep the positive momentum going and post a high finish.

Patrick Rodgers missed the cut in three of the four events he has played during this new season. Whatever was wrong then, seems to be fixed as a five-under 65 (for the second straight day) has him just three strokes out of the lead.

Ollie Schneiderjans, the young Texan who once made some noise at the Open Championship, is in similar position as Rodgers. Schneiderjans, a Web.Com Tour grad has missed the cut in all three of his 2016-17 appearances so far. However, like Rodgers, Schneiderjans went low on Saturday, posting a four-under 66. At -12 for the tournament, he is just four strokes back.

Chad Campbell was among the group tied for third going into the third round, but after an even-par 70, Campbell has dropped to a tie for 12th, although at five strokes back, he cannot be counted out on Sunday. Hiroshi Iwata, a member of the “63 in a major” group had one of just a few over-par round in round 3, dropping 19 spots after a one-over 71. Things were even worse for Hudson Swafford, who shot a 3-over 73 to drop from T3 to T38.

“It’s definitely playing a little tougher out there with the wind, but I managed it pretty good today, obviously the putter got hot, I made pretty much everything, and even if I didn’t, they looked like they were going to go in. I didn’t get off to a good start, I made a silly double-bogey on #3. It was one of those were you could panic a little bit, and I actually was, and then when I stepped on the fourth tee, my brother looked at me and said, ‘hey, listen, we have almost half the tournament to play, and that made me think a little bit, and I got composed and hit a great putt on #4 and almost made it, and then made birdie on #5, that got me going again.”
–Camilo Villegas